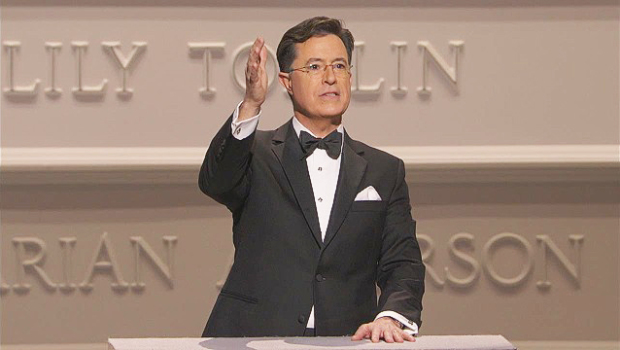 Tuesday night’s Kennedy Center Honors broadcast seemed to have everything, but amid the singers and dancers and gushing tributes, something was notably absent: host Stephen Colbert’s cutting joke at the expense of President Barack Obama.

After a gentle bait-and-switch addressing First Lady Michelle Obama as the “most powerful and influential person in the world,” he said:

“There she is. Looking radiant on camera next to the president, which I assume means she has no future plans to run for office. Thank you for being here, ma’am. There are a lot of democrats who don’t have that courage.”

The clip, which was released early and circulated through the news media, showed the president himself laughing harder than anyone. A bold joke, but no cause célèbre.

But on the broadcast, it was nowhere to be found. It was cut off after the “powerful and influential” part.

Edits are made all the time, but cutting Colbert’s best material from this broadcast is particularly curious (indeed, he had less airtime as host than most of the performers). Despite being pre-taped, the gig was Colbert’s first television appearance since sending his Colbert Report character “Stephen Colbert” into eternity, and also his first television appearance on his new home network. It was CBS’s first chance to showcase Colbert sans “Colbert,” as they prepare for his takeover of the Late Show in September.

Critics and laypeople alike have been asking two things: a) will Colbert be as funny without the character (the Colbert character was the product of the real Colbert’s brain, and CBS is giving him a show – not a lobotomy – so we can probably relax on this one), and b) will being on a network affect his ability to do edgy material?

Regardless of how his creative freedom shakes out in 2015, this remains a missed opportunity to show 9 million Kennedy Center Honors viewers that Colbert will still deliver what he’s known for.

New Colbert Report book is released, and changes the world. →