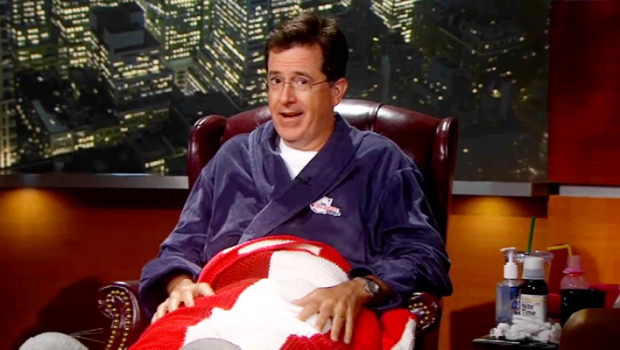 When somebody asks me, “what’s the most ridiculous thing you’ve done as a Colbert Report fan?,” I now have an excellent answer.

Until now, I’d cite the 13 Colbert Report tapings I travelled to New York for. Or how I co-authored a 230-page fan guide to the show. Or the simple fact that I never missed a single episode in nine years.

But I think paying good money for (what may be) Stephen Colbert’s germ-riddled bathrobe wins it. It’s everything you want in a case of extreme fan behavior: an absurd amount of effort, with just the perfect amount of creepiness thrown in (albeit unintentional).

It all started with an under-the-radar post on Reddit. A user walked past the show’s studio one Wednesday morning, and snapped a photo of a sign reading, “Tip of the Garage, Wag of the Sale. 10/23, 10 a.m.”

The Report was in reruns that week, and even though there was another batch of reruns ahead in November, those would be the staff’s last days physically working in the office while the show dark. Time to clean house.

What were they planning to sell? It could be old cables and office supplies. Stacks of books that publicists send to the show every day. Perhaps an array of props and wardrobe. Maybe even that cool light-up COLBERT sign that hung above the Colbchella stage. No concrete information was available, so all I could do was speculate.

I was determined to get in on this. The problem? I live in Toronto.

I sprung into action, soliciting assistance from everyone I knew in New York. I offered cash. I offered lifetime love and appreciation. Anything to get someone to go on my behalf. Turns out, way too many of my friends are employed with fancy day jobs. The remaining trust fund hipster types whined that midtown Manhattan was just so goshdarn far from Brooklyn.

By the end of the day, all I had were “maybes.”

I was about to put an ad on Craigslist to hire some shady rando when I was connected with a friend of a friend, willing to do it for the money I was offering. Perfect!

I explained what was happening — what little I knew of it. I told him to use his judgement, but spend hundreds if he had to. My top priority was anything that had been used on the show, or something with the show’s logo on it. If all they had were surplus Post-It notes, that’s fine too. He’d text me upon arrival and tell me what was available. Once he had the items purchased and determined the postage, I’d PayPal or wire him his fee plus his costs. Good? Good.

You know that type of stress you feel when concert tickets for your favorite band are going on sale, and you’re desperately refreshing the TicketMaster page at 9:59 a.m.? (Is that just me?)

10:00 came and went with no text. I stared at the phone in my hand, willing it to vibrate from a message instead of from my anxiety-induced restless leg syndrome.

Finally, he reported back. It was not what I wanted to hear.

Long story short, this genius went to a garage sale with no cash. Who does that? (In the finished piece, it turns out more than one person.) He expected me to wire him the money while he was standing there in the studio. And he’d retrieve it how exactly? And do so before he had to leave for – get this – an 11:00 class?

I texted back the only reasonable response in such a scenario:

“Are you out of your mind?”

My coworkers looked straight ahead into their monitors as I paced around them, powerless, muttering about how I should’ve just gotten on a plane that morning.

After arguing with the guy ‘til I was blue in the fingers, I resigned myself to the failure. Lesson learned: don’t cut corners when you’re hiring a personal shopper.

Through social media, I was able to piece together others’ accounts and learned how awesome this garage sale was. Not only were they selling off an incredible surplus of props (like all the fake “Vaxa” products from Cheating Death) and knick-knacks from Stephen’s own office, but the whole she-bang was being filmed for the show. All shoppers had to sign a waiver, and Stephen was there in person to hawk his goods and play cashier.

Hours later, still wallowing in my woulda/coulda/shoulda, it happened: a text.

I don’t know exactly how or when, but the idiot got me something: a bathrobe with the show’s logo on it, which he said they told him was “on the show.” For the low, low price of $5.

Did I say idiot? I meant savior.

I immediately sorted through my mental database of over 1,400 Colbert Report episodes. There was the light blue bathrobe that “Frank the Roommate” wore, but that didn’t have a logo. The red one Stephen wore after the 2012 election, also no logo. The white one Stephen wore after the Richard Branson water fight did have a logo, but was also what they used to give guests in their gift bags, so there’s no way to keep track of that one specifically as being “on the show”.

Then there was the time Stephen did the show while he had the flu. He wore a dark blue bathrobe with the show’s logo on it. It’s the only one of those bathrobes I’ve seen — maybe a sample, or made especially for the occasion. That would actually be really cool to have.

I wired the money, and idiot/savior sent the box (though naturally ignored my instructions to add tracking). Miraculously, a week later, it arrived on my doorstep in Toronto. 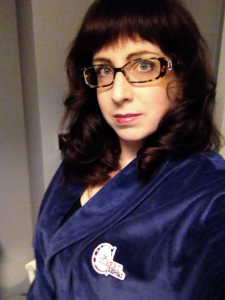 But is this THE bathrobe? The one that appeared on-air, a warm and snuggly embodiment of the mantra “the show must go on?” It has to be… right?

I examined the pockets for discarded tissues. Nada. I looked at the collar for evidence of stage makeup. Nope. I checked the spot where Stephen’s lav mic was attached to see if there was a snag or a mark. Nothing. I even smelled it. It smelled like a cardboard box. I’m not sure what I expected.

So what do I have? At the end of the day, I have no idea.

But thankfully, as of yet, I don’t have the flu.

New Colbert Report book is released, and changes the world. →