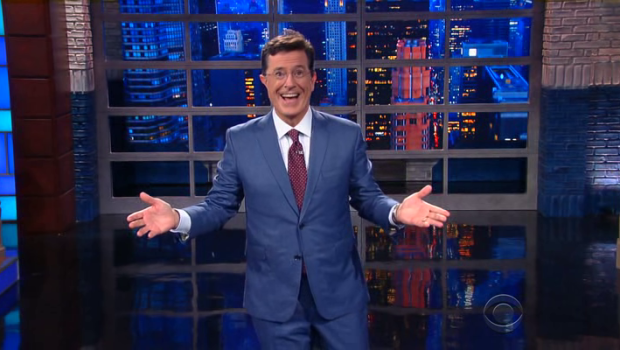 Being in the audience for the premiere of The Late Show with Stephen Colbert in New York Tuesday night: great privilege, or the greatest?

Put me down for “greatest.”

Much has already been reported: Yes, the whole thing ran over two hours. Yes, we got to see the musical performance twice due to technical issues. But here are just a few of the smaller quirks I loved from this historic night, especially for you Colbert hardcores. (I also attended a test taping the previous week, but spoilers abound – you’ll just have to wait for those.)

All in the Family

We met Jay Colbert long before Stephen pointed him out in the audience during the Jeb Bush interview. The show’s warm-up comedian, Paul Mecurio, habitually pulls audience members up on stage to (gently) interrogate before the show. Mecurio didn’t know it until he asked him his name, but it was Jay he selected to stand front and centre. The reveal made the crowd go nuts, and Mecurio lay down on stage in disbelief. Almost immediately, the four additional Colbert siblings in attendance jumped up there to a standing ovation. Nobody in the Colbert clan is shy, including Margo, who bowed graciously when the audience agreed she bore the closest resemblance to her baby brother.

Jay got an additional shout-out during the Q&A, when Stephen did his impression of a squirrel going to the bathroom (which was inspired by a story from Jay). Also: that was brother Ed Colbert sitting next to Les Moonves.

As was the custom at Colbert Report tapings, stage manager Mark McKenna gave the thumbs-up to Mecurio that it was time to start. Colbert, played onto stage by Batiste and the band, took his traditional four or five questions from the audience “to humanize me in your eyes.” Before the cameras rolled, he told us, as he always has, to “have a great show, and I’ll see you on the other side.”

The Bits: Tried and Tested

The two standalone scripted bits, both featuring food, were performed for audiences at test tapings. In the studio, stagehand Pat Farmer (familiar to Letterman fans) was tasked with placing and replacing the Sabra hummus beside the amulet. The Oreo/Trump bit didn’t go through any perceivable rewrites after it was performed in the final test show the previous Thursday.

The aired interview with George Clooney was spliced together from two entirely separate segments. Cut was:

Thankfully, the trailer for Clooney’s non-existent movie did make it, with Colbert mouthing Clooney’s lines as it ran on the studio monitors.

The two had an animated conversation during the break between segments, with limited interference from the staff. (It appeared as though Colbert was explaining the Ed Sullivan Theater renovations to him.)

Jon Batiste and Stay Human are a joyful force of nature. Anyone who frequented tapings of Colbert’s old show will remember that during commercial breaks, a row of middle-age male asses (his producers and head writers) huddled around the desk and created a barrier between the star and his audience. These days? Same asses conferring at the similarly C-shaped desk, but now shakin’ to the music a bit while they work (much moreso in the test taping than on premiere night, natch). Can’t blame ‘em – Batiste and his band had the house rocking. Colbert even joined Batiste centre stage for a full song at one point, purely for the benefit of the studio audience.

Jeb Bush’s interview was torn apart and stitched back together to the point that it’s difficult to cite all the edits. There were two different endings shot, and the web-only piece featuring the raffle winner’s question was taped separately. The audience, seemingly ready to get on its feet for any reason, only gave Bush a partial standing ovation. This is a liberal but polite fanbase (Stephen raised us well) so there were no obvious negative reactions to Bush’s entrance.

The most notable bit between the two of them is perhaps the most heartbreaking moment to lose of the whole taping: Colbert teaching Bush to how to get more attention the morning after a debate by Trump-ifying his answers. Colbert did his best Donald Trump impression here, with the help of an orange-colored cotton candy “wig” that a stagehand had stashed under the desk in a Dylan’s Candy Bar bag. It was as wonderfully dumb as it sounds.

We are Everyday People (And So Can You!)

Those random faces that popped up on the screens during the musical number? That was us! After our long wait outside, we were given our numbered tickets and a 90-minute break before loading into the theatre. But first, we had the option of having our photos taken at one of three makeshift photo booths inside the front doors of the Ed Sullivan Theatre. What you saw was what we looked like after many hours outside in a heatwave. We really put the “shiny” in shiny happy people. To add insult, my green shirt wouldn’t work against the green screen backdrop, so they had me put a winter jacket overtop of it. 97 degree heat, folks. But I was still smiling – that’s me in the lower center and upper right: 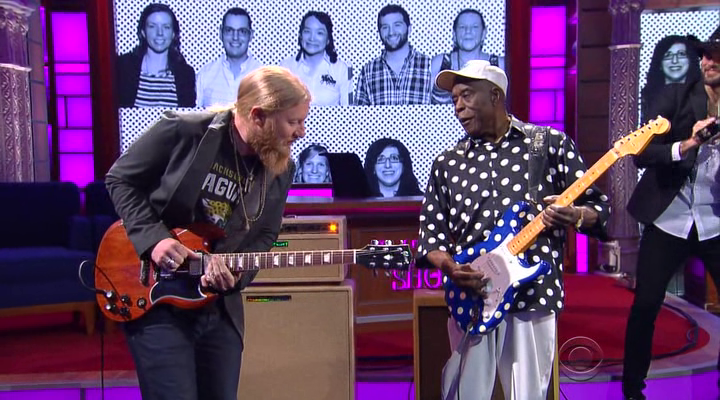 Bonus tidbit: the broadcast does not do justice to the volume of the screams we emitted when Jon Stewart took off that catcher’s mask.

One Response to Behind the scenes at Colbert’s Late Show premiere: 7 deep cuts