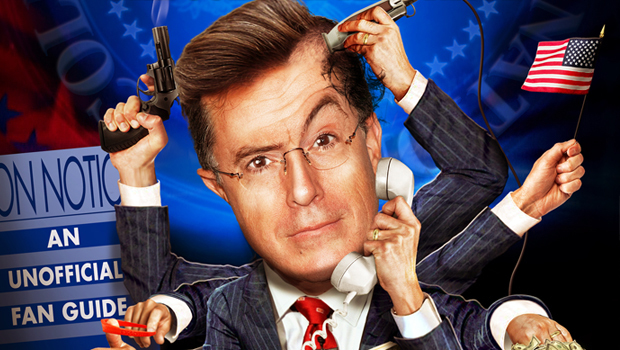 …and if that headline didn’t instantly give you deja vu, then you definitely have to read this book.

Hyperbole aside, I – your trusty editor here at Third Beat – have been hunkered down all year long to write, along with co-author Remy Maisel, Bears & Balls: The Colbert Report A-Z. 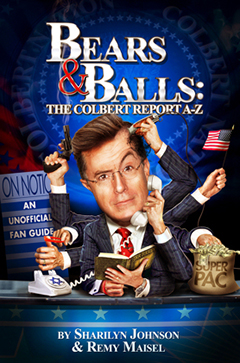 If you’re a regular Third Beat reader, the subject matter shouldn’t come as a shock. The most popular content around these parts is all “fake news” related.

But when I remove my journalist hat (a fedora, natch) and put on my fan hat (handcrafted from tinfoil), shit gets real. I’ve traveled from Toronto to see 13 tapings of the show in New York, and related events such as Colbert’s appearances at the New Yorker Festival, 92nd St. Y, University of Buffalo, and the Wellmont Theatre. In 2008 I went down there every Saturday to take executive producer Tom Purcell’s Writing for the Colbert Report course at The P.I.T. I wrote and toured an entire one-woman show about the fandom. Students at Stanford University studied me, because I’m clearly somebody who needs to be figured out.

But how did this book come to be? Well, they say that you have no idea how inaccurate the media is until they report on something you have intimate knowledge of. I didn’t consider writing a book about the show until until Colbert’s April announcement that he’d be taking over the Late Show on CBS in 2015.

As something of a Report expert, I started being asked by other journalists to comment on the news. It was a few of the questions asked in those interviews, along with reading other reporters’ speculation and opinion pieces, that made me realize how little the general public actually knows about the show. I realized if there was going to be a book, I would be the one to write it. And if it was ever going to exist, it should exist now.

Remy Maisel and I met online a few years back, and first collaborated on this ridiculously ambitious post to celebrate the Report‘s 1000th episode. When the decision came to write the book, she was the only person I considered asking to be my partner in crime.

Together, we’re incredibly proud of how informative, hyper-detailed, and most importantly fun this book turned out to be. And as the final month of the Report counts down, we’re honored to be the ones paying tribute to it in this fashion. We’ll miss it terribly, but we’re also excited for what’s on the horizon.

Now that you’re feeling all the feels, here comes the pitch: now available in paperback and for all major ereaders, Bears & Balls would make a stellar gift for any Colbert fan on your Christmas list. (Yes, we said Christmas. There’s a war on that word, y’know.)