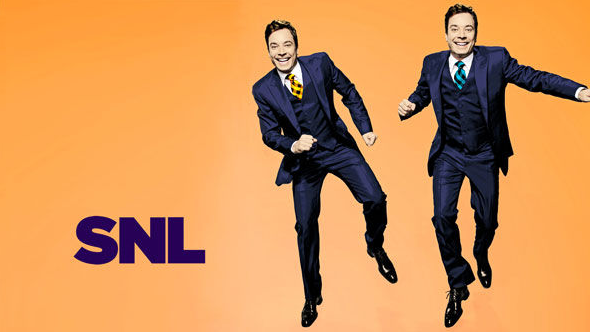 SNL from the Bleachers, Part 1: Pre-Show 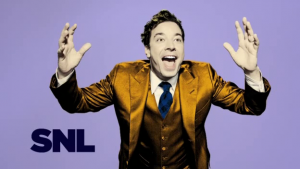 A Saturday Night Live ticket confirmation is the kind of email you scream at.

The odds of scoring tickets are slim. Ridiculously slim.

Never mind for Jimmy Fallon’s homecoming as host, the week before Christmas.

I honestly expected my first experience at SNL to be watching from the writers’ room, because that’s usually the best that those of us mid-level comedy blog editors with low-level industry pull are able to get. But my current ties to SNL are limited to the fact that Bobby Moynihan was my improv teacher at UCB, which puts me in the oh-so-exclusive company of hundreds of New York comedy hipsters. Not exactly VIP worthy.

So? I entered the infamous lottery.

Here’s the lowdown on tickets:

Hundreds of thousands of people submit for the SNL ticket lottery via email every August. The studio holds about 200 people, and tickets are distributed for both the dress rehearsal and the live show.

This was the fourth year I put my name in the hat. I know of people who’ve waited longer, but the people in line behind us got lucky their first time in.

Now, my assumption was that I didn’t get tickets for this season, because I expected that the draws would all take place in September. But it wasn’t until Nov. 28 that I was sent my ticket confirmation from NBC for the Dec. 17 show. Our line-mates from D.C. got their confirmation just 10 days before the show.

Was there ever any doubt that I’d be booking a flight for this? Absolutely not. But if you can’t make it to the show that’s been selected for you, tough luck. The tickets are non-changeable, and non-transferable.

That means: if someone is trying to sell you their SNL tickets on Craigslist, it’s a scam, unless they’re actually offering to meet up with you at 30 Rock the night of the show after they’ve obtained the tickets with their own photo id (though I’m not sure why anyone would want to do that). Otherwise, the only way you can buy tickets legitimately is through charity auctions.

We had live show tickets, and our arrival time was 10:15 p.m. We arrived at 9:15 p.m., and there were about 40 people already there. The line for ticket holders is on the main floor inside 30 Rock, so no need to dress for the elements. We didn’t need to arrive that early, incidentally.

Our line was separate from the standby line. Some folks were camped out all week (outside), and I talked to a few people who’d gotten there at 2:30 a.m. to wait. Numbered standby tickets are distributed on Saturday morning, and those people are then allowed to leave and get some sleep before returning for the show. It isn’t until the final minutes before air that the standbys find out whether they’ll get in or not. 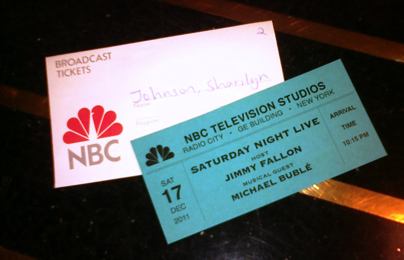 There was limited communication throughout the whole process, including some confusion re: the lines. We ended up with some standbys in our line who didn’t realize they were supposed to be at the other end of the hall. VIPs were gathered haphazardly along the wall opposite to ours. There was no signage, and no verbal instructions until it was time to check in.

I was shocked to overhear how many people walk into 30 Rock off the street, and expect to be able to get tickets for that night’s show. It happened over and over. Both the security guard and the audience coordinator, Kara, were repeatedly asked by Joe Middle America “are there any tickets left”? To their credit, they were genuinely nice to these people every time. Me? I was quickly losing my patience just with the tourists wandering past and asking what we were waiting for. (It’s Saturday night. You’re at Rockefeller Center. What do you think we’re waiting for?)

At about 9:45 p.m., those of us who had the tickets in our names were told to leave the line and approach a gentleman at a podium, with our confirmation email and our photo id. Our names were checked off the list, and we received two tickets inside an envelope with our name on it, and we re-joined our party in line.

Things turned a little clusterfucky when it came time to go through security and into the elevators. 30 Rock is still open to the public at that time of night, and the whole throng of us filled up the hallway pretty solid. It would probably be beneficial if they rerouted public traffic during the load-in process.

There was a quick announcement saying that there are no photos allowed in the studio, and that we had to show that our phones were all the way off before we went upstairs. We went through the metal detectors and had our purses “searched” (they didn’t spend much time with them), and then loaded onto elevators that were pre-programmed to take us up to the 9th floor.

The next steps were a little odd: Show our tickets to the page. Get a wristband with the show’s date on it. Get in line. Pass by another page and surrender our tickets (seriously?? Those gorgeous, iconic SNL tickets, which would look fantastic framed on our walls? C’mon…). Pass by yet another page who then asks to see the envelope that the tickets came in. A whole lot of checkpoints for a single hallway.

We were led into the bleachers from above, and instructed where to sit. The bleacher seating is raised up, balcony-style, about 12 feet above the studio floor.

There are benefits and drawbacks to every location in the studio, but the only bad seats would likely be the ones that angle along the sides a bit. Those are the last bleacher seats to be filled, so if you arrive a bit before the 10:15 p.m. cutoff time, you’re golden.

There are four rows of bleachers that wrap around, and then a padded bench along the back wall.

The floor seats were filled last, with people I recognized from the VIP clusters. They also hand-picked people from the general line to sit there. I wouldn’t say it’s straight-up “beautiful people”, but there was a certain fresh-faced, put-together look to them. Lastly, singles from the standby line filled in the remaining holes.

Random: how many people do you think tried to take pictures in the studio? Too damn many. Guys in suits were doing some yellin’ and deletin’ before the show in response to the people who just don’t know how to listen.

Again, communication was oddly lacking, and the show could really benefit from a designated in-studio wrangler. My friend needed to use the ladies’ room, but we didn’t even know if that was allowed (it was).

At this point, we were basically left on our own to stare at the set for a while. Lenny Pickett and the band played a few tunes.

Being in that studio, with that history, is an intense experience. Between working in television and going to see tapings of shows in general, I’ve seen my share of studios. From local news to Naked News, from Martha Stewart to Jon Stewart, not much should really surprise me at this point. But to look into the rafters (which were essentially eye-level), I got genuinely emotional to see some of the old lights with “8H” etched on to them, and even one with the NBC logo from the 1960s.

This seems like a good place to end part 1. Continue to part 2 for details of the show itself!

3 Responses to SNL from the Bleachers, Part 1: Pre-Show