In honour of this incident, here’s Third Beat’s exclusive Illustrated History of SNL Castmembers Injuring Themselves on Podiums While Playing Politicians Named Ford: 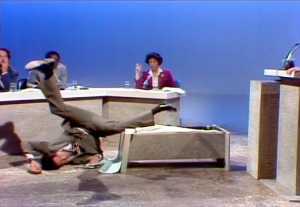 Chase was portraying the bumbling Ford in a sketch called Debate ’76 when he took one of his signature falls over the podium and injured his groin.

Chase missed the next two shows due to the injury.

And… those are actually the only ones.