Conan: when comedy and sex collide

I’ve been working on a post about hot guys in comedy, to turn the tables on the hot-chicks-of-comedy lists that

Conan writers: Punching up the clock

While the writers from the Tonight Show with Conan O’Brien didn’t win the Creative Arts Emmy this weekend, there IS

If you happen to be Canadian, and you don’t generally read the Toronto edition of this blog, you might want

Conan sidekick Andy Richter was the guest co-host on Live with Regis & Kelly this morning, and he had plenty

The past 24 hours have been a little mind-blowing in the world of late-night tv. Leno out? Conan out? Leno 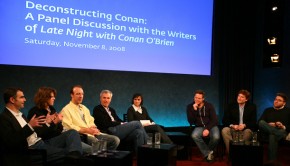