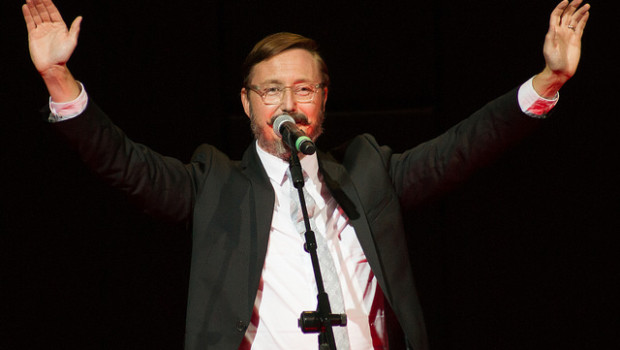 It’s the time of year when Toronto gets both cooler and funnier, as JFL42 – the Toronto edition of Montreal’s Just For Laughs – puts comedy nerds into overdrive. 42 artists, a whole whack of venues, and, as always, not enough time. Traditionally, this is the part of the recap introduction where I remind everyone that just a few years ago, one of the 42 “things” was a free donut. So with that out of the way, here are some highlights from the first half of the festival:

Did he ever. With just 53 hours to go before his premiere as host of The Daily Show, Noah showed the Sony Centre that he was, unquestionably, going to fully own that new job. He covered Charlie Hebdo, travelling from Africa during the American Ebola scare, racism in journalism, and the experience of being pulled over by police in America — all with a sharpness and fresh perspective that we’re already seeing translated on screen.

Mulaney had some fun with the couple who’d won the nightly Air Canada-sponsored front-row seat upgrade at the Sony Centre, which came complete with flight-themed seats. “Super weird you’re pretending to be on an airplane right now.” he noted. A few minutes later, when the female half got up from her seat, he called after her: “Ma’am, you can’t just leave in the middle of the flight.”

Mulaney went off-mic to keep her from hearing, and hatched his plan to confuse the poor woman. Later in the show, he’d say the words “and you know what they say in Toronto.” And we would respond, “we love pancakes!” Silly, sure, but we were game.

She returned. Another half hour of material about marriage, Catholicism, and house hunting went by. Finally, the magic moment. We delivered our line perfectly. (Sure, maybe this loses something in writing, but damn it, we had fun.)

Joe Mande, rolling with it 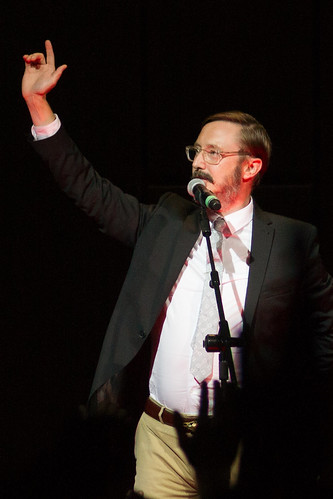 Mande, opening for Mulaney, had barely set foot on stage when a cellphone – playing a church bells ringtone – echoed through the Sony Centre. He made the wise decision to address it, not knowing that this person apparently didn’t have voicemail for the call to go to. It went on, and on. With each ring, his weariness grew (“What did I do to deserve this?”), and the laughs grew with it. Finally, it ended, and the crowd reacted accordingly.

“That is the weirdest applause break I’ve ever gotten,” he said.

The newly-bearded Hodgman treated the more highbrow JFL42 types to a series of tales about summer homes in Massachusetts and Maine, accidentally buying a boat, and other first-world problems like getting high at a swimming hole with Jonathan Coulton. If that all wasn’t pretentiously folksy enough, he ended the set with a ukulele sing-along. (And just when you start pondering how very NPR the guy is, he drops a Garrison Keillor reference. Perfect.)

Furthest Below the Radar

The Habs may always be better than the Leafs, but at least those in attendance at Mike Ward’s show now have something to brag to their Quebec relatives about. In la belle province, Ward is a full-blown celebrity. Plus, he was all over the press a few days earlier for being hauled in front of Quebec’s human rights tribunal for a joke he made about a disabled boy, who gained prominence several years ago when he was granted his Make-A-Wish request to sing for the Pope. But it seems what happens in Quebec stays in Quebec. Here in the “rest of Canada,” Ward was booked to headline the 100-seat capacity Comedy Bar. He gave the intimate crowd a full explanation – and expansion – of the offending joke, lamenting that the kid simply refused to die (“I tried to drown him and I couldn’t!”) As vile as that looks in writing, Ward never makes it sound serious, and is likeable enough to make it work. (At least in this province, anyway.)

One Response to JFL42 Highlights – Round 1