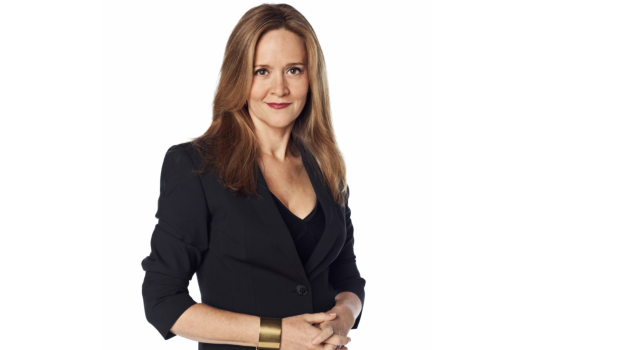 “I’m not saying I haven’t paid my dues, and worked hard at my career, but there was also a certain degree of chance to my getting this job.”

It was 2003, long before the words “lean in” became a feminist rallying cry, and Samantha Bee was trying to find her way at the Daily Show. She’d been plucked from semi-obscurity in Toronto, where she was part of a sketch comedy troupe called The Atomic Fireballs and starred in commercials for Canadian Tire and cheese (like, just cheese in general).

There are a hundred just like her in Toronto: talented people barely eeking out a living as comedic actors, paying dues that they hope will someday be positioned as humble beginnings.

As the success story goes, she became so much of a Daily Show institution, she topped many lists of potential hosts to take over from Jon Stewart. But as Bee prepares to say farewell to The Daily Show tonight after an unprecedented 12 years as a correspondent (she’ll host her own topical comedy show on TBS this fall), it’s hard to view her as ever being a beginner.

But a beginner she was. When Bee was still getting her footing in New York, she wrote a series of five journal entries for Canada’s National Post newspaper. Her lengthy accounts have since been wiped from the paper’s website, but her candid vulnerability will feel familiar to anyone (particularly us ladies) to ever jump off a professional cliff.

She was getting her first tastes of fame:

“I read an article about myself in a newspaper that isn’t this one, and find it unbearable. Truthfully, they just printed what I said on a day when I was feeling particularly long-winded and inarticulate. Aaagh. I hate seeing my own rambling thought process in print.”

She was working to fit in:

“I’m still struggling to find my way here. Defying all logic, I am a performer who is ridiculously shy. I need to go out on an individual basis with everyone on the show and have a couple or three martinis.”

She was missing her husband, Jason Jones, who without a U.S. work permit had to stay behind in Toronto:

“We are not used to being separated like this, but we both recognize that this opportunity far exceeds our need to be together constantly. And so we shuttle back and forth. It’s not pretty, but we will deal with it. Tears are shed by me. Phone bills rise astronomically.”

She struggled not to hold herself back:

“Today we had the joke meeting, which went very well, although I am still at the point where I am slightly intimidated by everyone else. At the meeting I censored my ideas, and found that in the split second in which I was judging my ideas, they would spill out of someone else. I must stop this immediately. I am challenging myself to be more forthcoming with my ideas, and allowing myself to fail.”

As viewers, we innocently assume that everyone who gets an opportunity like this was born ready. And all too often as women, we tell ourselves we have to be ready before we take it.

Bee’s remarkably open accounts prove that neither of those things is true. And they also prove how alien our own insecurities will look to us — and to others — in a very short period of time.

Her new series will present Bee with new challenges and new uncertainties. But even her 2003 self knew, deep down, how to handle it all:

“Screw my Canadian modesty. Sink or swim: This will be my new mantra. And it’s in print now … so there.”