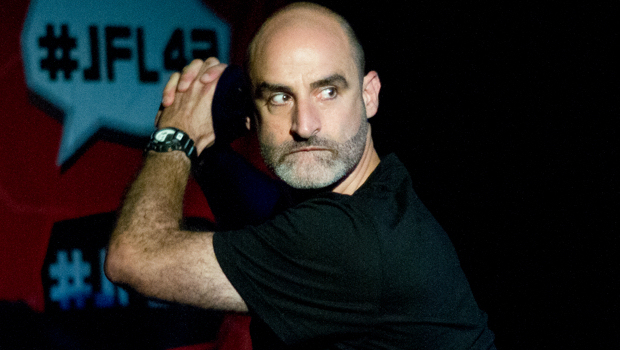 JFL42 Dispatches Part 3: The Rest of the Best

Can you believe it was only 2012 when two of the “things” at JF42 were already-free Strombo tapings and a goddamn donut? Everyone I talked to Saturday night was just plain exhausted, which is always the sign of a good festival. 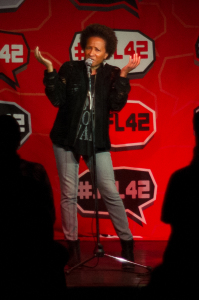 The Alternative Show never quite delivered the same star power as it did on Wednesday, not that it was possible. In fact, Thursday was an entirely different theme: Andy Kindler presided over an all-Toronto lineup, which while solid, is available to us the other 51 weeks of the year. Yes, the Alternative Show is a grab bag, and that’s part of the appeal. But it’s not the entire appeal. Getting to see a higher-profile comic (your Holmes, your Tompkins) in a small venue alongside the folks you’ve seen a dozen times feels like a happier mix, and perhaps something to shoot for more of next year. Friday night’s edition had painfully surpassed the two-hour mark when Brody Stevens (above) hijacked it, eventually giving way to a surprise appearance by Wanda Sykes (our annual megastar drop-in, like Aziz and Louie before her). But Saturday’s crowd got to see Ian Karmel shirtless, so I guess that was equally memorable. One last Alternative note: JFL42 could do us all a favor and schedule Mark Forward‘s headlining sets earlier in the evening, so he can be on every single one of these.

Pete Holmes had a fair share of You Made It Weird podcast fans before him at the Randolph Theatre on Friday, all of whom sat squarely in the palm of his hand. Textbook Holmes, his was an hour of bite-sized personal experiences couched in silliness: watching What About Bob through 35 year old eyes, the obviousness of his closeted friend, the awkwardness of visiting a Montreal strip club, and a new piece about men being portrayed as idiots who simply await sex. Partway through what was clearly one of his favourite bits – impression of a deep-voiced little boy he encountered at a public pool – he couldn’t contain his laughter, and stopped to explain “the burden of having to perform this bit. I wish I could just watch it.” His glee for his job (and life in general) never gets old.

Ron Funches is a volcano who could murder us all, or so he claimed in his signature soft-spoken tone. He did indeed kill at the Randolph Saturday (despite being under the weather), giggling his way through a hostage role-play scenario with an audience member and a bit about a naked dancing Hispanic baby (which was supposedly “too creepy” to perform on The Tonight Show), and dipping into heavier topics like divorce (“it’s fun to have an arch nemesis”) and raising his autistic son.

I’ll say this about Seth Meyers: he’s much more confident and in the groove as a standup than he is as a talk show host. His tightly-written 65-minute set at the Sony Centre felt tried and tested, though he did give us some locally-focused gems at the top. About Toronto, “I definitely want to come back when you finish building it” — noting that the “Toronto Scaffolding” would be a perfect pro sports team name. He wished Rob Ford well, but imagined that until now Doug Ford “lived in a glass case that said ‘break in case of comedy emergency’.” And Saturday Night Live fans got their fix of Update jokes — specifically, ones that were quashed by NBC censors. Meyers otherwise works pretty clean, and goes for slice-of-life observations about everything from his wedding day to playing XBox Live against 12 year olds. His mainstream appeal made him perfect for the venue, and perfect for a Saturday night crowd.

In closing? I personally didn’t see any duds (though I did hear about a few). I avoided the Queen Elizabeth Theatre for all but one show, because a) I’m not a masochist, and b) the JFL42 organizers made it easy to do so by booking acts across multiple venues. Also, Ian Karmel may be the hardest working man in JFL history (even including Montreal) with a total of 22 opening or headlining spots throughout the festival.

I will note one big surprise that came out of the post-Festival publicity-email-full-‘o-stats: attendance was 42,000, comprised of 6,000 single tickets and 12,000 pass holders. Doing the math on that, the average pass holder saw only three shows. Three? Does that not feel low to you? If you’re unfamiliar with how the system works: you book a show with your credit, arrive at that show, check in, and receive your credit back and use it to book another show. It’s essentially all-you-can-eat comedy for a week. I saw 12 shows and I took it easy this year. I take this to mean that people are buying passes to see the few things they really want to see (a Sony Centre show + something else), and aren’t going beyond that. I don’t know what the solution is, or if one is even wanted from a business standpoint, but I’d like to see these fringe comedy fans experience more next year. (Join us on the dark side, suburbanites.)