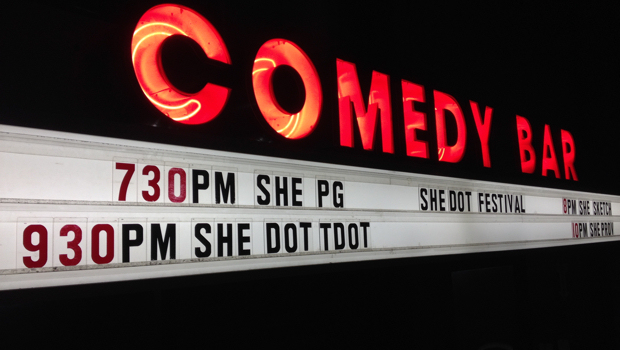 The inaugural SheDot Festival took over Toronto’s Comedy Bar for of three nights of all-female comedy this weekend, staged by Toronto comedians and producers Martha O’Neill, Becky Bays, Anna Gustafson, and Karen O’Keefe. The festival moves to the Opera House Sunday evening for a gala hosted by Trish Stratus.

Friday night’s SheNotTDot show, featuring out of town comics, was hosted by Allison Dore at the Comedy Bar Mainstage. Throughout the show, Dore took full advantage of the costume rack backstage, and walked out in a new ridiculous outfit after every set (a favourite ensemble was a knitted sweater bearing the image of a massive cactus, paired with aviators). She also did some fittingly feminine material about asymmetrical breasts, and some funny ad libs when she messed up a few of her introductions.

Nour Hadidi kicked off the show with her vision of an Arabian version of The Bachelorette, and discussed the three accents she has (Arabic, Arabic/Canadian, and an American teenage girl accent for when she’s going through airport security). Erin Harkes talked about the illogical nature of the phrase “put your hands in the air like you just don’t care,” then fantasized about replying to annoying people by just gesticulating her arms. Kate Conner did a risky bit about the art of theatre, and a confrontational piece about the frustration of motherhood. Ashley Bez talked about men who don’t wear the right size of condoms, and went on a wonderfully absurd tangent about going into a laboratory and falling into a vat of cum. Kris Simmons told an anecdote about going to a trendy bar in Brooklyn, and enjoying how all the twenty-year-olds suddenly thought the place wasn’t cool because she was there. Iris Benson spoke about sexting, and the fun of ending conversations by making up terrifying fetishes. Rebecca Reeds closed the show with a great rant about why she hates people who brag about tanning to gingers (“it’s like showing off how well your legs work to a person in a wheelchair”), and a piece about how she wishes she was a lesbian because she’s always getting hit on by gorgeous women.

The SheSassy show was held in the intimate Cabaret space of Comedy Bar Friday night, hosted by the bubbly Christina Walkinshaw. Walkinshaw opened the show with a solid set about her love of drinking, her innocent boyfriend, and her ridiculously jiggly arms. Keesha Brownie talked about how her name sounds like food (Quiche Brownie), and related some incidents involving her unique Jamaican parents. Karen Mitten performed a very funny bit about the shenanigans she got into when she grew up in New Brunswick, and explained that New Brunswick’s license plates say “be in this place” simply because they desperately don’t want you to leave. Becky Bays explained her frustration with the saying “everything happens for a reason,” and recounted an anecdote about an incompetent flower girl. Anna Gustafson told us why she finds it strange to use the term “boyfriend” after you’re past adolescence, and discussed her return to comedy after five years. Karen O’Keefe related a story about getting a booty call from a man who found her number using the operator, and did a related bit about what it would be like to get a booty call from an automated telemarketer (“Would you like to…six… nine?”). Molly Sanchez ended the night with a bit about her crazy, sexually adventurous friend settling down, and recounted the priest’s speech at her grandfather’s funeral.

Saturday’s SheFresh show, also in the Cabaret space, was hosted by Rhiannon Archer, who did a great set about the recklessness of UPS delivery men and how they nearly stole her dog. Catherine McCormick explained the stupidity of the Paleo diet, and how she thinks obesity is a step in our evolution as the next Ice Age approaches. Danz Altvater told us about meeting an extremely old woman who thought she was utterly beautiful (“she’s seen all the standards of beauty throughout time, so she knows what she’s talking about”). Hoodo Hersi talked about choosing between rap and feminism, and the ways people react to her name. Rhonda Riche recounted a lengthy story that resulted in her going to prom with her high school crush. Meg McKay told an anecdote about going on a date with a guy who told her that aliens are real because Thor exists. Kris Simmons discussed her mother’s uncomfortable affection for her husband, and the weird marketing of plus-size women’s clothing. Erin Harkes did a monologue about trying to convince other people she’s not crazy, which started with a text message to a guy and ended with her yelling about him and knocking on his door. Ashley Bez capped off the night appropriately by telling a story about drinking all the tequila at a bar, and bringing home the bartender.

Tickets for Sunday Night’s SheDot Gala can be bought online through shedotfestival.com.

Julianna Romanyk Julianna Romanyk is a writer and comedy aficionado living in Toronto. Her work has been featured by The Serious Comedy Site, Spundge, and Off JFL. She's currently an intern critic/blogger with Just for Laughs.