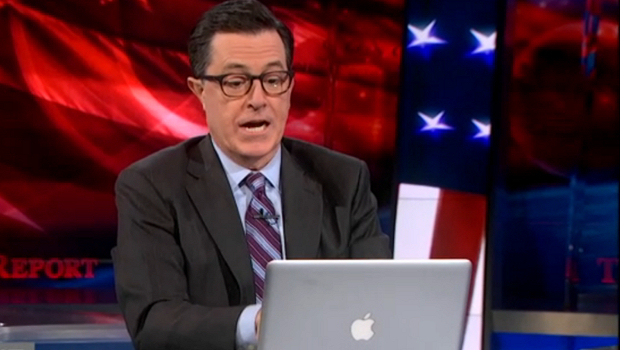 This post is outdated! If you’re looking for an update on how Colbert is gearing up to end his show, you probably want to check out this post instead.

Stephen Colbert is leaving the Colbert Report – and the conservative pundit character he created – behind him to take over David Letterman’s spot at CBS in 2015.

The deal reportedly happened quickly, and the end of the Report is happening quickly too: the show will go dark for the final time in December of this year.

But how will it end? Colbert will want to close the book on his creation with the same level of creativity he’s exhibited since its 2005 premiere. An earnest, maudlin, teary send-off simply won’t do. Instead…

One challenge ahead of Colbert is how to educate viewers (current and future) of the clear division between the “Stephen Colbert” character and the Colbert we’ll see on CBS. Most people understand there is a difference, but are vague on what that is.

Creating a storyline (or a “game” in improv/Report terms) that stays open-ended when the Report is done, and causes or explains “Stephen’s” removal from the air, is a perfect way to create that division.

Colbert revealed on an episode of NPR’s Fresh Air that if he’d been successful in getting on the 2008 Republican primary ballot in the South Carolina, he already had a plan for how to drop out of the race.

“I wanted to like actually go down to South Carolina and like stumble around Columbia, the capital, like pantless with a bottle of Jack Daniels and try to get arrested,” he said.

A similarly fictional scandal for the fictional character, leading to his fictional absense from Comedy Central, would provide clarity and wipe the slate clean for the non-fictional Colbert.

Disown the “new” Colbert in advance

The free market has spoken, as his character would say: CBS is going to pay him more money, therefore anything they want him to do is the right decision. So let’s turn this on its head: have his Report character openly embrace this move, but get increasingly confused by the “requests” CBS is making for his upcoming show.

What would happen if Colbert relayed to his Report audience how much CBS wants him to “change his style” and “be a nicer guy”? How it’s as if they want him to act like a whole other person? Almost a… character?

He’s toyed with us this way in tiny morsels. A great example: the plastic-framed glasses he now wears only in real life made an appearance in a recent Report segment, in which his character mocked liberals. When he removed them, he cleverly remarked, “of course, I was just doing that in character”.

Why not execute this mind-melding flip-flop on a bigger scale? Tell the Colbert Nation that despite the “other guy” CBS is going to force him to be going forward, the Stephen Colbert his Report audiences know and love will always be underneath.

Ben Folds will play him out

This will likely happen no matter what. Why? Colbert himself says he wants it to.

In a live Q&A fundraiser for the Montclair Film Festival in 2011, Colbert told interviewer Jonathan Alter:

I feel like a quote out of context
Withholding the rest
So I can be free what you want to see
I got the gesture and sound
Got the timing down
It’s uncanny, yeah, you think it was me
Do you think I should take a class
To lose my southern accent
Did I make me up, or make the face till it stuck
I do the best imitation of myself

He later reiterated his love for the song, and explained how it related to his character, in another segment for Fresh Air.

Plot twist: this collaboration may have already happened. After Ben Folds Five appeared on the Colbert Report, a press image was released – shown on that Fresh Air page – showing Stephen presumably singing with the group (he used his lav mic to introduce them, not the one in the photo). It’s common for musical guests to do an extra song that isn’t aired, and logic dictates this is the song they would’ve done together. Is the footage being held onto for this occasion, or will we see Mr. Folds in-studio in December?

Of course, Colbert likely has a game plan in his back pocket that will make even the most educated guesses look foolish in retrospect. But options like these are the very least we should expect from him at the end of 2014.