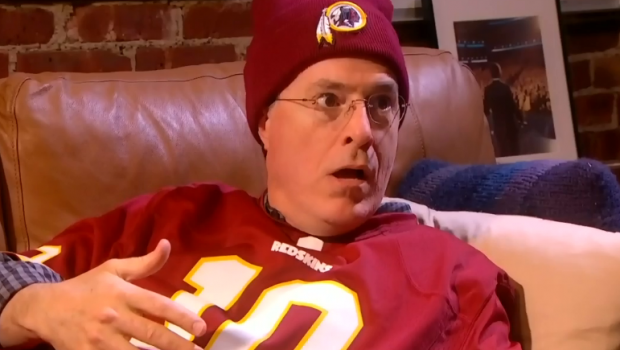 It’s no wonder the #CancelColbert response video is all over your feed today (see it: USA / Canada).

I watch the Colbert Report not just as a comedy journalist and a fan, but as someone who knows a bit about how that show is written. (A few years ago I was in one of three small groups taught how to write for the show by Tom Purcell, then-head writer and now EP.)

Throughout the weekend I couldn’t help but put myself in the writers’ shoes, curious how they’d formulate a response to the #CancelColbert Twitter frenzy. (For those unaware: a line from a piece satirizing racism was tweeted out by Comedy Central Thursday evening, without context, and Twitter lost its collective shit.) It’s one thing to write to Stephen’s character within the parameters of the world the show creates. But when the games get complicated, and both the character and the man are unexpectedly thrust into the real world as a package deal, the answers aren’t quite as obvious. Add a serious accusation like racism into the mix, and it’s certainly a brainteaser.

But Colbert delivered beautifully (as Colbert always does) with a layered response that managed to do what the show does best — despite the creative obstacle course set up by the media and activists.

Here are five of the many reasons why his response worked so well:

1) It was grounded
Meta moments are few and far between on the Report. But in a segment for (and about) people who aren’t very aware of the difference between the man and the character, nothing would land with them if the line wasn’t clearly drawn. Looking straight into the camera in-character and telling us he’s speaking as himself – and the audience doing their part by laughing appropriately – was a beautiful shorthand to re-establish this as all “Stephen Colbert” the character.

2) It wasn’t too on the nose
There was never a danger of Colbert sincerely uttering the words “this is satire”. The game of the show would grind to a halt. But when that’s the main argument, how do you dance around it? You dance around it very, very closely. Colbert made his satirical intent clear with an analogy to the most famous piece of satire ever written, Jonathan Swift’s A Modest Proposal

. (Fun fact: that piece is the model for the show’s The Word segments, which follows a structure of problem/solution/extension of the solution.)

3) The original target remained
It might have been easy to let the segment focus purely on his character’s feelings about this “attack”. From the first shot of Colbert laying on his office couch wearing Redskins garb, to announcing all of his charity’s proceeds will go to the Redskins charity, Colbert used this opportunity to reiterate the original point and provide – once again – the context that was lost on the #CancelColbert activists. Even better: not letting the activists become the new target.

4) It stayed one step ahead
The recurring “people tell me I’m white and I believe them because…” joke has never been this useful. This latest one (“…I just spent devoted six minutes to explaining how I’m not a racist”) packed a self-awareness punch guaranteed to head off any subsequent criticism, and eliminate any defensiveness that could be inferred.

5) It was really, really funny
Jokes. Jokes everywhere. (Speaking of: is that a 3D-printed Emmy next to the real one in the cold open?)