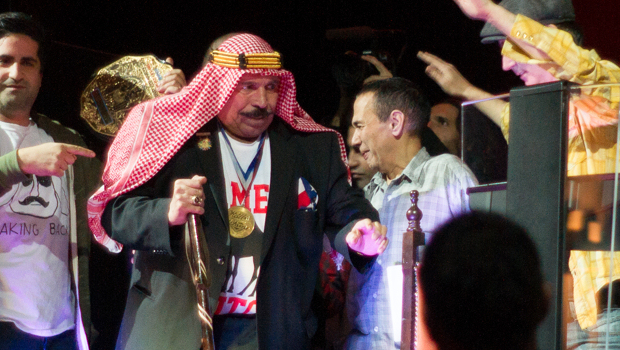 Thursday night at Toronto’s Royal Cinema, the Dark Comedy Festival hosted the Roast of wrestling legend the Iron Sheik. Or as I call it, Night of a Thousand “Faggot” Utterances. (Stage full of men threatening to sodomize each other… nothing gay about that, right boys?)

In front of an audience of Toronto’s classiest neckbeards, the dais was filled with a talent pool more uneven than an inconsequential WWF match. The superstars of the night were the much-loved Gilbert Gottfried

, and Comedy Central Roast writers Jesse Joyce and Tony Hinchcliffe. The guys-in-plain-tights-using-their-real-names in this analogy were Spencer “Spenny” Rice, who admitted to only writing material on a napkin at the bar next door before the show; and Brutus “the Barber” Beefcake

, who, while not a comic, was still under-prepared material-wise and could have used a writer.

The only participant who fared worse was discarded 102.1 the Edge personality Todd Shapiro, who earned boos for boring the crowd. It was one of those performances that you keep telling yourself is intentionally weak (right??), but reaches a point where you no longer care because it’s just as much of a failure as a character piece. The silver lining came in the form of callbacks, as his very presence became a punchline for all who followed. But there was no shortage of highlights. Here are the best lines of the night, from them and everyone in between:

20) Mike Lawrence on the Iron Sheik’s relationship with Hulk Hogan:
“I heard he ripped your asshole like it was a yellow t-shirt.”

19) Tyler Morrison, on why we should buy poutine for the Iron Sheik:
“Over [in the Middle East], all the kurds have been burnt.”

18) Tony Hinchcliffe, finding Spenny’s notes on the podium:
“Spenny, do you want these? Because the audience didn’t.”

17) Jesse Joyce, on Brutus “The Barber” Beefcake’s metal-plateed facial reconstruction:
“He can’t even get through airport security. Because he can’t afford a plane ticket.”

16) Brody Stevens
“The Iron Sheik is so old, he’s called the Iron-Deficient Sheik.” 15) Tony Hinchcliffe, on the Iron Sheik:
“He’s one of the nicest guys I know. He’d give you the shirt off his head.”

14) Tony Hinchcliffe, on the Iron Sheik:
“He was going to start his own Muslim wrestling circuit, but he couldn’t get his Shiite together.”

13) Jesse Joyce, to Tony Hinchcliffe:
“I’m glad you could take time off from telling racist jokes in Jeff Dunham’s lap.”

11) Tyler Morrison, to Gilbert Gottfried:
“You’re more washed up than the tsunami victims who cost you your Aflack endorsement.”

10) Tony Hinchcliffe, on Gilbert Gottfried:
“He’s like your mayor’s penis. He hasn’t been seen since the 90s.”

9) Jesse Joyce, on Kenny vs. Spenny:
“Usually when people watch a two-person competition, they only expect to see one loser.”

8) Gilbert Gottfried on the Iron Sheik’s steroid use:
“Explains why his testicles are smaller than Brody Stevens’ fan base.”

7) Jesse Joyce, on Brody Stevens’ potential for fame:
“The Iron Sheik has a better chance of renting a U-Haul in lower Manhattan.”

5) Jesse Joyce, to the Iron Sheik:
“You look so uncomfortable up here, you’d think you were sitting next to you on an airplane.”

4) Gilbert Gottfried on the Iron Sheik’s age:
“Nowadays when he climbs in the ring, he says ‘wait, what did I come in here for again?'”

3) Mike Lawrence to the Iron Sheik:
“The last time you fucked someone in the ass and made them humble, Chris Kanyon shot himself.”

1) Jesse Joyce, on the Iron Sheik’s English skills:
“Any time anyone’s tried to give him Rosetta Stones, he throws them at women and gay kids.” Dead horses beaten throughout included Brutus’s para-sailing accident and facial reconstruction, and Gilbert Gottfried positioned as a child predator. The tone was edgy and evil, exactly what one expects from a roast. The only genuinely disturbing moment of the night: realizing that the only female comic on stage, Katharine Ferns, wasn’t there to perform but to anonymously deliver beer to the men all night. Really?

The Sheik himself, now in his 70s, paid little attention to those who were speaking unless explicitly baited into an expletive-riddled rant (he’s still got it!). He briefly stood behind the podium at the end of the night for his closing remarks, but delivered little in the way of retaliation. Why should he? He’s the Iron Sheik, dammit.