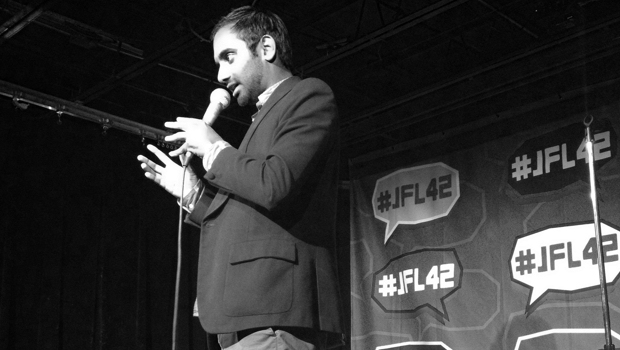 What JFL42 wants and what Aziz Ansari wants aren’t necessarily the same thing.

This show, like all others in the festival, started with an announcement about video and photos. Video, no. Flash photos, no. But the festival does encourage “a non-annoying amount of non-flash photography” (like the grainy iPhone masterpiece above), with the condition that audience members post photos with the hashtag #jfl42.

So, welcome to the stage, Aziz Ansari! Cue the excitement of the crowd, eagerly awaiting his big opener. Which was… telling everyone not to film him.

Ok, yes. Absolutely. Nobody should be filming any comic’s set without their permission, especially when they say they’re working on new material (as Ansari did). But JFL42 crowds are good at listening to those pre-show directions, as there appears to be zero video evidence of last year’s Louis CK drop-in on the same show. It’s cool.

Except that it wasn’t.

Ansari wanted all phones to be put away, because it looked like we could potentially be filming. Also, the flashes are distracting. Never mind that those two things are mutually exclusive. (And did anyone have a flash on?)

With that #JFL42 hashtag staring the audience down from the backdrop behind him, Ansari pointed out that there are already plenty of high-res images of him available online, lest we forget he’s superfamous.

But wait! Not so fast, one audience member decided.

The onus for this awkward start shifted onto a man in the front row, whose overt picture-taking attempts became a clear violation of the “non-annoying” part of the pre-show announcement. He had the nerve to debate Ansari on this, telling him that his kids are “big fans” while he tried to line up his shots.

Ansari bargained with the guy. He stood frozen in place long enough for one good shot in exchange for no more pics, finally taking this to a relatively fun and non-confrontational place.

So anyway… we get to hear jokes now, right?

Ansari did work on some new stuff, primarily about relationships. These were mostly germs of ideas, still being read from a notebook, and being bounced off members of the audience (like the method you want to be told there will be no second date, versus the method you want to use to tell someone there won’t be). Most of seemed too fresh to even be slotted into tonight’s performances at the Sony Centre. It was ultimately an enjoyable set, and undoubtedly a thrill for fans to see Ansari up close and his material so green.

But it’s hard not to fixate on how the set started: shouldn’t a guy this famous – and so concerned with his image – have a prepared method of dealing with the phone issue? A method that’s actually entertaining, engaging, and friendly (in addition to being effective)? This uncomfortable and unfunny start was fully in his control, regardless of the audience member who made it worse.

Most other comics digging a hole like this off the top wouldn’t have made it out within their eight minutes, but Ansari can do no wrong these days. Whether that speaks to his skills, his fame, or a bit of both is in the eye of the beholder.

2 Responses to JFL42: Aziz Ansari drops in on the Alternative Show