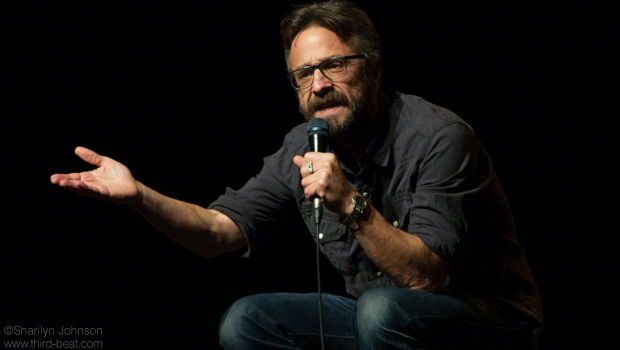 Much has changed for Marc Maron since he was last in Toronto.

In 2010, he played the downtown Yuk Yuk’s club to a small contingent of early-adapting listeners of his WTF podcast and in-the-know comedy nerds. What a difference three years make: three million downloads a month, a new book and tv series, and two shows Tuesday at the Queen Elizabeth Theatre for JFL42.

Things are good. Despite that, he was the same angst-ridden, self-examining Marc.

“I still have the same brain,” he told the first of his two audiences. It’s a good thing, because that brain still supplies Maron with exactly what makes his standup what it is: hyper-aware examinations of his own hostilities, judgments, and obsessions.

It all seems to co-mingle just fine with his happiness.

“I’m not self-loathing, I’m not hating on myself that much, so my brain decided to subcontract that job out,” he said.

He was referring to his long-term relationship, which he told audiences (in both this show and in his late-night guest spot on the Alternative Show) is going through a rough patch. He said he’s unsure if his wedding is still going to happen, but for the sake of the show, “we’ll go ahead as if it is.”

His fiancé has been picking on him, he said, as he recounted an evil and hilarious way she recently insulted him using a sound effect. But she’s adamant about having a baby, an ongoing possibility that he’s shared with his listeners.

Maron’s material can appear to be about any subject on the surface, but it’s always really about the inner workings of his own mind. For example: his bit about auto-erotic asphyxiation isn’t just a comment on or observation of the practice. It’s an analysis of his own hypothetical attempt to try it, laying out in great detail exactly how his inner monologue would lead him to failure should he ever try.

Maron coined a word for one of his commonly-felt emotions: “contempathy,” the feeling of instant hatred of a person that switches to empathy upon the realization that they’re “sad”. He illustrated the definition with his story about judging a man’s choice of clothing at the Montreal edition of Just For Laughs, and then noticing a large scar on his head, presumably from a surgery.

He recapped the events of his first two marriages, outlined his fascination with Hasidic Jews and hatred of atheists, and told a candid story about getting cured of hypochondria after one too many visits to the urologist.

If he’s stressed about his success, he isn’t talking about it on stage. His main external complaints are the minor career trappings, like getting a replacement toothbrush from a hotel while he’s on the road, or when he has to “get up early and enter a ‘morning zoo’ situation.”

Maron’s colour commentary of his own internal monologue remains sharp, uncompromised by his career success. He seemed genuinely touched by the standing ovation he received from the early show crowd, and even returned to sign a few items for fans in spite of the venue’s tight turnover time.

All photos copyright Sharilyn Johnson. May not be used without permission. One Response to JFL42: Marc Maron at the Queen Elizabeth Theatre