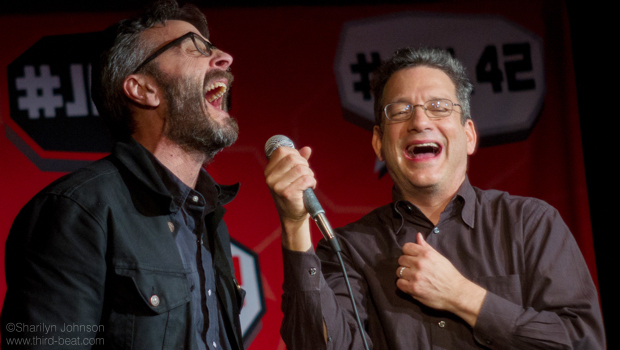 The nightly shows at Comedy Bar are selling rapidly (you’re already out of luck for Saturday), and Kindler himself addressed the history as he kicked off the 2013 editions Tuesday night.

“I’ve had some great shows here in previous years,” he said. “That ship has sailed. I can’t keep living up to other people’s expectations.”

It seems he spoke too soon.

With a local-heavy lineup – which included Chris Locke, Kathleen Phillips, K. Trevor Wilson and Nick Flanagan – the show had an onstage energy in keeping with 2012’s best nights.

Marc Maron dropped in after his shows at the Queen Elizabeth Theatre. He admitted he sought “negative validation” from the audience at his second show, and reported that he’s having some trouble at home with his “girlfriend, fiancé, soon to be ex.” At the end of his set he fooled around onstage with Kindler for a few moments, who opened for him earlier in the evening (pictured above is their dual Ricky Gervais impression).

In another highlight, Pat Thornton enlisted Mark Forward to play a shopkeeper in a wonderfully stupid bit called “Pat Almost Buys a Magazine.”

Forward returned to end the show, playfully berating the crowd for being uptight (hey, we were tired!) and chiding one specific audience member in the front. Said audience member chucked his vintage Blue Jays hat at him in retaliation. Forward promptly stuck it down his pants and, as he claimed, rubbed it on his balls.

Yes, you read that correctly. And that was just night one.

The Alternative show continues through Saturday, 11:00 p.m. nightly at Comedy Bar. If reservations are unavailable through the JFL42 pass system, passholders can try their luck in the standby line.