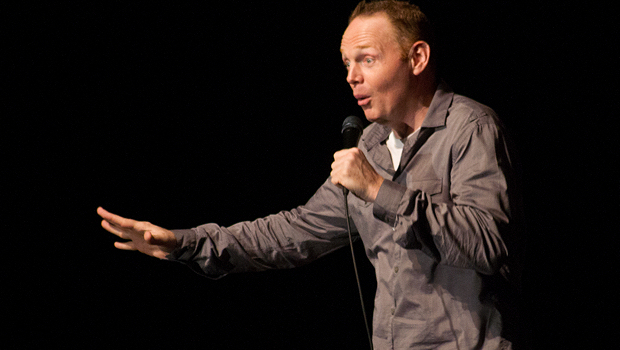 It was the first show of JFL42 to sell out, so it’s no surprise that Saturday’s crowd at the 1,250-seat Queen Elizabeth Theatre welcomed Bill Burr with a partial standing ovation.

Burr opened his first of his two shows riffing on the venue name not matching its “Eastern European” aesthetic, before correcting himself to be more polite.

“This is some of the greatest grey paint…,” he said.

That made way for bigger ideas, and his hilarious rant about Ghost Hunters and that there can’t possibly be a greater force in the world that “gives a shit about us”. He cited a notable bus crash as proof that there’s no perfect universal plan, because even if it was their time to go, there were still dozens injured for the sake of killing nine. Hadn’t these people been through enough by being on a bus for four days? JFL42’s repetitive pre-show announcement to not yell out during the show (recorded by Todd Glass) still hasn’t reached everyone. Burr started talking about how whenever someone in the public eye says or does something wrong, the media jumps all over it.

“Rob Ford!,” yelled someone near the front, forcing Burr to get up to speed on the mayor’s crack scandal.

But as he was saying, when someone says something homophobic, like the guy from the Philadelphia Eagles…

“RILEY COOPER!,” boomed a voice from the back.

Burr gave a gentle verbal spanking to the guy, and explained that he just assumed we cared more about the CFL up here. He riffed on Canada and our sports interests, including that we obviously don’t give a fuck about the Blue Jays.

“Where the fuck was everyone when you weren’t in the World Series? I saw all those blue seats on ESPN,” he said.

That was mercifully the end of the uninvited banter from the otherwise rapt crowd, and Burr was able to get to his point about the media’s handling of political correctness.

He noted that minority groups are seen as victims, and can do no wrong. The history of Native Americans is portrayed in an idyllic manner, with “not one date rapist among them,” he said.

“Gay people ruined steam rooms in my country,” he said. He told the crowd that he wants to become a sweeter person, and intends to get married and have a family soon. He imagined life with adopted Third World kids. He’d want one sweatshop worker and one blood diamond miner, ideally.

His detailed hypothetical fight with the two of them – including playing favourites with the diamond miner because he’s tougher – was a highlight.

As was his fascination with ranking dictators. Hitler was the Michael Jordan of dictators, “first-ballot hall of fame evil,” he said, while Stalin was “the Jeff beck of murderers”. (Where does Walter White rank, one wonders?)

Burr lost track of time on stage thanks to the lack of a flashing light at the back of the theatre. Based on the apparently frantic signals he was getting from the wings, he determined he should wrap things up, much to the audience’s disapproval.

“Do you guys wanna fight the next crowd?,” he asked, to enthusiastic applause.

Burr has a reputation as an “edgy” comic, but he covered uncomfortable subjects without ever making the audience uncomfortable. There was an indicator of his decency in every bit, and he didn’t toy with the audience by pushing the envelope simply for the sake of pushing the envelope. Voicing his frustrations from the perspective of an observer rather than a preacher made him easy to love. The full standing ovation he received at the end felt like a no-brainer, and Toronto should expect Burr to fill a much larger (and less grey) venue when he returns.

2 Responses to JFL42: Bill Burr at the Queen Elizabeth Theatre