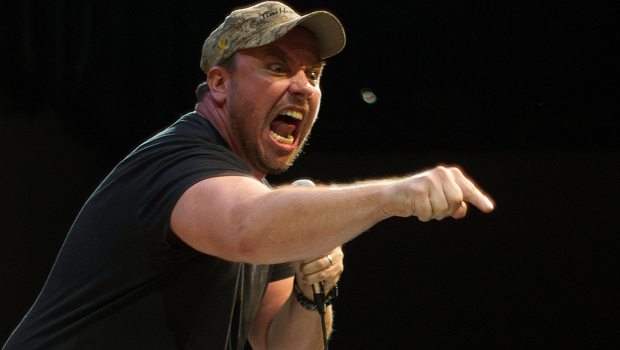 Don’t bother looking up the definition of “next”. It didn’t change overnight.

The winner of the SiriusXM Next Top Comic contest – part of JFL42 – is indeed Pete Zedlacher, already one of the better-known comics in the country. Looking at the list of contenders, nobody could have reasonably predicted any other outcome.

That isn’t to say the other acts made it a cakewalk.

SiriusXM’s Ben Miner hosted the affair, warming the crowd up off the top and bringing out 2011 winner Matt O’Brien to do some time of his own (2012 winner Eric Andrews did the same post-intermision).

Calgary’s Alan Cho was the first at bat. Neither his nerves nor his material choices served him particularly well. His self-deprecating material about being a dad and not looking the part went over well enough. But odd references to tampons and chloroform, made the set suddenly feel like a game of Open Mic BINGO, and his closer about racism didn’t quite land.

Vancouver’s John Beuhler deftly used Cho’s racism closer as a segue into his opener about how you can’t be racist against certain people. With a tight and snappy set, Beuhler was the first to truly get the crowd going. After venturing into some sex and dating material, he went into a well-written piece about politically incorrect words, re-contextualizing them in an effort to prove them powerless. Favourite line of the night may have been “What’s wrong with your steak? / It’s a fag.” Winnipeg’s Jordan Welwood had a slower build. His premise of homeless people in downtown Winnipeg wearing Winnipeg Jets gear seemed to be a stretch for the crowd, but he was able to get them with the notion of all foreigners being sexy (and trying to capitalize on that as a Canadian abroad). A brilliant premise about old people’s magical tales of how they met their mate, and what a similar story would sound like for a couple meeting today, capped off his set nicely.

Brian Aylward of Halifax went with the fish-out-of-water theme. He explained how his useless university degree eventually landed him in Korea teaching Kindergarten. The centrepiece was the description of a finger-up-the-ass “game” the students played with him against his will. The highly physical bit had to be seen to be appreciated, and naturally killed. (Hey, people love butts.) In the second half, Rob Bebenek came out fighting with a high-energy set featuring a pair of crazy people fighting on the streetcar, the ridiculousness of plastic bag fees, and a sound argument for bringing back the practice of punching people in the face. He had the strongest set of the night up until that point.

This was Zedlacher’s competition to lose, and he gave it all he had. He used more of the stage than anyone else in the show, and worked up a sweat with his lengthy impression of an asshole Canada Goose. His idea of how to make Arnold Schwarzenegger’s recent Toronto appearance worth the $425 ticket price was equally energized. The roof was never blown off the place, but the set was solid and his energy clearly appreciated.

Chris Locke was arguably Zedlacher’s biggest competition, and you could even call this a tossup. Every bit landed: being judged by his lunchtime pizza delivery guy, society’s misuse of track pants, what it means to sit and eat Chicken McNuggets in a McDonald’s restaurant, and mistaking a pan in his dishrack for his cat (which post-show he revealed to be a new bit). Locke plays the schlubby everyman card expertly, dedicating almost all his time to self-deprecating material that never feels heavy-handed or repetitive. Following three high-energy comics who had more structured sets, Montreal’s Eman El-Husseini‘s conversational style didn’t seem to match the audience’s expectations. She got off to a soft start musing about the end of summer, which did lead to some relatable observations about annoying couples and annoying singles alike. Her material about being Arab and Muslim got her more traction, right before the unfortunately-timed cheque drop.

Headliner Colin Quinn ploughed through his own set as the judges tallied their votes. He opened with a bit about the Eaton Centre (or that he made be about the Eaton Centre) and encountering a homeless guy, and seemed to select bits from his repertoire as he went. The most fun part of the set was when he mocked the faux brick building that serves at the backdrop for Second City’s current production, which coincidentally resembled the stoop from his short-lived / why-the-hell-is-it-not-on-Netflix Colin Quinn Show on NBC.

Quinn was his usual caustic self – ranting about people who don’t get sarcasm, and other social annoyances – but he wasn’t engaged. Maybe he felt like a placeholder (fair). Maybe he sensed the audience had had enough (also fair). The red light flashed, indicating his time was up, and Quinn didn’t have to be told twice. The very second that light went, he was gone. Outta there. Didn’t look back.

(This, incidentally, was Quinn’s only true standup set of his JFL42 stint. His full-length performances are of his one-man show Unconstitutional, about the US Constitution.) Zedlacher walked away with a $15,000 prize, and the knowledge that he still doesn’t need a day job.

Photos copyright Sharilyn Johnson. May not be redistributed without permission.