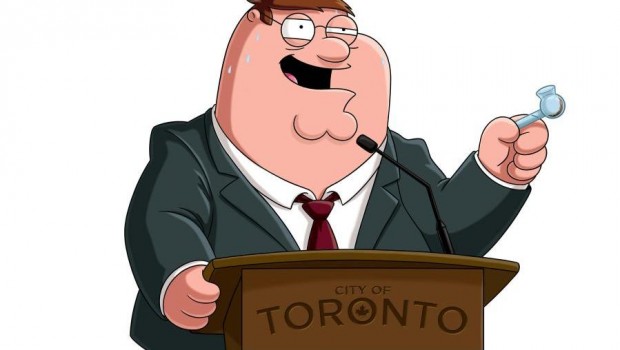 JFL42 – aka Toronto’s edition of Just For Laughs – starts tonight. Aside from link-bait preview lists from online media (ahem), here are five other things to expect from this year’s festival: 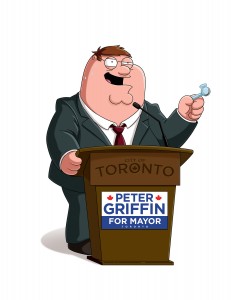 5) Rob Ford jokes
JFL got the first one out of the way with this fantastic graphic of Peter Griffin holding a crack pipe, created by the Family Guy animators as a collaboration between FOX and JFL42. Safe to assume there won’t be any keys to the city handed out this next week. If the Montreal edition of JFL is any indication – where every American comic opens with a comment about how everyone speaks French – we should be have our fill of “your mayor” commentary within a few credits.

4) A Reined-In Alt Show
Andy Kindler is back, but James Adomian and Todd Glass are not. The frenetic improv in 2012’s marathon late night shows would be hard to repeat regardless, but the lineups should still be strong. Between this, and the likely equally stacked Set List in the first half of the festival, Comedy Bar is set to be the unofficial postshow hangout again.

3) Freebies
Let’s not sugar-coat it: some of these shows aren’t selling well. The festival sent out an email Wednesday evening to passholders, offering 50 free (no-credit) seats per show for the bulk of Thursday night’s small-venue offerings. Many venues are offering individual tickets for sale already, and Twitter is ablaze with promo from artists and venues alike. It’s an inevitable flaw in the system: who is spending a credit to see a show at the Drake Underground this early in the festival, when you can ensure your spot at Bill Burr? Things should even out as the festival goes, but keep an eye on your inbox regardless.

2) Freebies, part 2
Not associated with JFL42, Clandestiny (768 Queen St. E.) is holding “secret” midnight shows all week, free for anyone who has a JFL42 pass. Expect to hear some underground buzz about unadvertised appearances by JFL42 performers, using the no-compete sections of their contracts as rolling papers.

1) Media’s Sudden Fascination with Logistics
Expect a lot of chatter about the “process”. Unlike last year, the media isn’t being shielded from the annoyances of the pass/credit/check-in system. No guestlists this year. We’re being given credits just like everyone else, and have to fend for ourselves. We really, really hate not being special. But hey, at least this year’s epic software update isn’t for Maps, right?