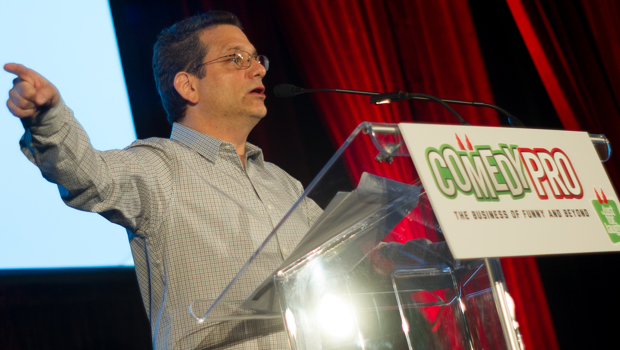 One word for Adam Carolla: ouch.

But more on that later.

After a delightfully insider-y introduction by John Mulaney (the best: a reference to the Sleuth reference), Andy Kindler delivered his annual State of the Industry Address at Just For Laughs on Friday.

He insincerely “apologized” for last year’s speech, which earned him some backlash for going after an industry darling. “I was effusively praising Louis C.K., but it didn’t come across like that,” he said.

He playfully ribbed Colin Quinn – in attendance – for his Keynote Address on the same stage, and reached back to last year’s Keynote speaker to get the skewering rolling.

Patton Oswalt, he said, did an impressive job of the speech, managing to comment on the industry while also managing to “sandwich in all his credits.”

“I have my issues with Patton. He’s very modest,” Kindler added later. He did praise Oswalt’s “perfect” Asiana Airlines joke that got slammed by Salon.com. (“You’d have to run sideways to not get that joke.”)

-Vine videos (“Hey Vine, I’m sorry, your 6 seconds are up.”)
-James Franco on the cover of GQ’s comedy issue
-Louis CK’s fashion sense (“American Gervais”)
-Here Comes the Boom (the sequel will be “Here Comes the Comedy Boom”)
-Ricky Gervais believing he can do standup (“if there wasn’t licensing, he’d be in a hospital right now doing brain surgery”)
-Drunk History (“Let’s get Comedy Central executives drunk and they can explain how they pick their shows”)
-Seth McFarlane hosting the Oscars (“never done standup before, how could that go wrong?”)
-Grown-Ups 2 (“Will those guys ever grow up comedically?”)
-Jimmy Fallon (“has a great bit called Slow Dancing the Comedy”)
-Gallagher
-Billy Crystal
-Mike Berkowitz and APA
-Penn Jillette
-Jack Reacher
-Jeff Foxworthy
-Celebrity Game Night
-And of course, Jay Leno

But in what will go down in SOTI history, Kindler went after Carolla in one of the most deliciously harsh diatribes he’s ever delivered at the Festival.

Kindler graciously allowed Third Beat to capture a page of his notes.

Here’s the Carolla chunk, in black and white (click to enlarge): 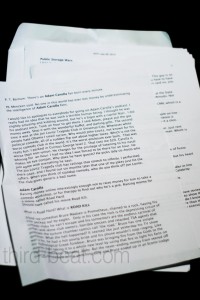 “I didn’t realize he was a bigot with a capital Nazi.”

“Adam Carolla is like Hitler, if Hitler wasn’t funny.”

And so forth. Most of the venom was reserved for Carolla’s attempt to fund his movie, Road Hard. The film is to be about a fledgling road comic, despite Carolla himself having no experience in that area.

“We all love Steve Hofstetter, right?” prompted one of the biggest laughs of his speech. He shared Hofstetter’s email to industry the day before, asking for comics to essentially pay for a chance to be in Carolla’s movie. The email reads in part:

At the time I write this, Adam has raised $779,000 of the one million dollars the film needs to happen. By providing amazing prize packages like set visits, in home standup performances, premiere parties, and more, Adam is helping change the face of Hollywood. There’s an incredibly unique prize package up for grabs, which is to send a tape to Adam. He will personally review and pick three comedians to not just be in the movie, but to have their standup featured in it as well. Currently, only 55 comedians have submitted so you have pretty good odds. That is one hell of an opportunity. Whether or not you get chosen, you get reviewed, you get some amazing movie SWAG, and your name will be in the credits.

When all had been said, Kindler admitted “if [Carolla] comes after me, I’m going to roll into a ball and cry.”

But based on the reaction in the room (most vocally from Todd Glass), there would be no shortage of people who’d have his back.