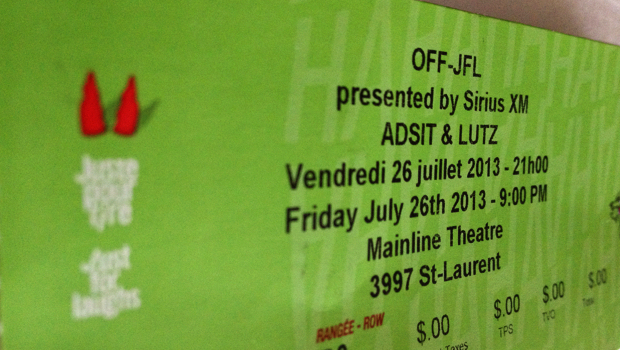 Warning: inside baseball ahead.

I’ll say upfront that I arrived at this show heavily biased. Scott Adsit is one of my favourite improvisers to watch, and he helped make the now-defunct Let’s Have a Ball show at UCB one of my must-sees on every trip to New York. He regularly performs two-handers there with John Lutz, his 30 Rock co-star, which I was excited to finally see Friday night at Montreal’s Mainline Theatre.

They opened their first scene with nervous pacing, before establishing everything within this exchange:

Four damn lines. It should always be that easy, shouldn’t it?

It’s tough to do justice to their scenes in print: the museum patron, redneck chefs, a pedophile and soccer dad. But despite the depth of relationships they established, and hilarious overall premises, the most impressive thing to witness is the virtual mind-reading. They executed seamless cut-tos without announcing them, and switched off playing multiple characters at once. At one point, Lutz arrested himself as both the cop and the criminal. (The latter is tough to explain, but this may well be in the territory of the 2 Square format that I have yet to actually see.)

Adsit’s quickness is always what impresses me most, and Lutz is at the same level. Together, they’re ridiculously good. It further helps that they were clearly having loads of fun up there, coming close to breaking on multiple occasions.

The three-sided seating and dual entrances on the Mainline Theatre stage mimic the layout of the UCB Theatre. It made for one of the best unintentionally funny moments of the night when Adsit attempted to knock on the back wall, only to have his fist hit curtain, curtain, and more curtain.

If you don’t understand half of what I’ve been talking about here, don’t worry: you’ll enjoy this show. But if you’re an improviser, you’re simply crazy to miss this. But again, I’m a wee bit biased.

Adsit and Lutz perform one more show Saturday night at the Mainline Theatre.