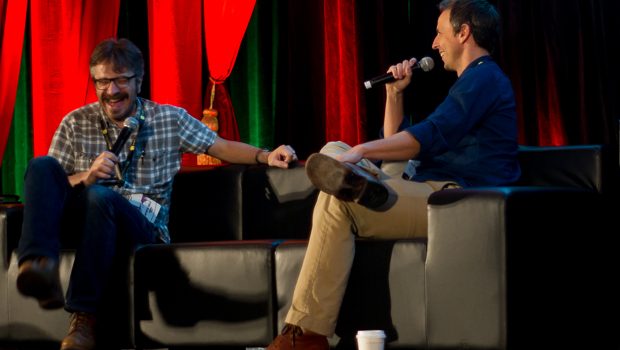 Perhaps it was the marathon late-night edition last year that prompted Just For Laughs to limit Marc Maron’s WTF podcast to only a 1-hour slot on Friday afternoon. How cruel! But if that already sounds like not enough time (not even close), check out the lineup: Seth Meyers, Big Jay Oakerson, Tig Notaro, Trevor Noah, and Eddie Izzard. Maron made the most of the jam-packed hour ahead of him, taking questions from the front rows – off-mic – while the audience was still trickling in and the music was pumping through the room. Most everyone who wanted a book signed (and a sticker, and a button) were taken care of before the show started.

After an efficient introduction with only one email shared (from “Darren”, whose dream about Marc humping a member of RUSH was as great as it sounds here), Seth Meyers shared his history of driving to Montreal to drink when he was 18, and his failure to learn French despite his mom being a French teacher. Continuing his tradition of Saturday Night Live star grilling, Maron tried to get Meyers to say something – anything – negative about Lorne Michaels. The best we got out of Meyers? “He’s shy.” Tig Notaro made the expansive ballroom suddenly feel like Maron’s garage, openly discussing her well-documented life and health struggles over the last few years. She expressed gratitude for her situation in a way that never came across as Pollyanna, and explained the value of “surrendering” to the reality of devastating news. WTF fans tempted skip over live episodes would be well-advised to listen for this alone. South Africa’s Trevor Noah, perhaps the most buzzed-about comic at this year’s festival, educated the audience (and Maron) about the realities of growing up during Apartheid. Mixed race, to boot. Noah would be a fascinating guest for a full episode. Hell, make that two. Last but not least, Eddie Izzard revealed he’s competing with Noah to see who can learn German first. He came armed with a message to executives from comedy fans in France: send over standup specials with subtitles, not dubbed over, because the fans know how important tone and inflection are. He also got deep into political theory and the appeal of the Monarchy (at least, as deep as you can get when the clock is ticking).