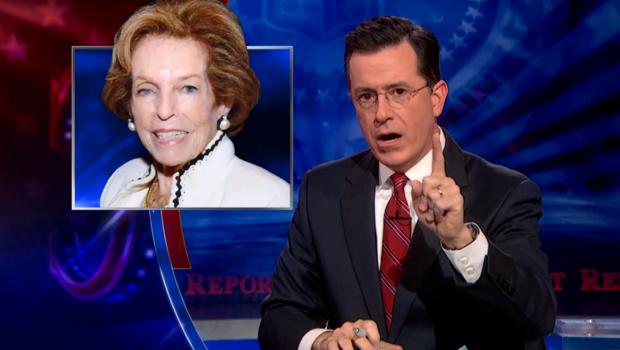 Click here for a transcript and video of Colbert’s moving tribute to his mother on the 6/19 episode of the Colbert Report.

Update 6/19: Tonight will be a new episode, with guests The Postal Service.

Update 6/18 #2: The Colbert Report website’s “upcoming guests” section has been restored with new shows scheduled for June 19 and June 20, but nothing has been promoted on the show’s Facebook or Twitter pages as of yet.

Update 6/17: The Monday, June 17 episode (with guest Sen. Olympia Snowe) has reportedly been cancelled and replaced with a repeat, with new episodes returning Tuesday.

Thursday night’s Colbert Report will be a rerun so that its star, Stephen Colbert, can be with his family after his mother, Lorna Colbert, died Wednesday at the age of 92. This according to Dan Dinello, via Twitter, who has worked with Stephen and whose nephew (Paul Dinello) and son (Bryan Dinello) are on staff of the Report. Dinello also tweeted that Lorna died one hour prior to yesterday’s hour-long episode featuring Paul McCartney. (As of 6/14, both tweets have been deleted.)

Lorna Colbert’s obituary appears on the Charleston’s Post and Courier website. The family has asked for donations to the Medical University of South Carolina Foundation for the Dr. James W. Colbert Endowment Fund.

In February of 2012, production of the show was suspended so Stephen could be at his mother’s side after an unspecified medical emergency.

“She gave us a real scare this year,” he told Oprah Winfrey in an interview last September.

Lorna spoke about her son on the South Carolina talk show The Big Picture in 2008: