(Ed.: As of Thurs. 5/16, the Twitter account is now described as a parody. But let’s take a moment to appreciate how hard it is to tell with these people.)

Teh internets drama du jour comes courtesy of Amy’s Baking Co., a dining establishment in Scottsdale, AZ. They’ve earned one-star reviews on Yelp, and had their buns handed to them on a recent episode of Kitchen Nightmares.

LAist has a fantastic rundown of the owners themselves coming unhinged via social media today, and their ongoing salute to the caps-lock key is dominating the /r/drama subreddit to the point where they’re now threatening to sue Reddit. (So no, they don’t seem to understand what Reddit is.)

Sure, that would all be entertaining on its own. But wait, there’s more! Within the nuggets of full-blown stupid that Amy’s Baking Co. has provided, there’s one so succulent it almost deserves a place on their dusty, unread menu.

Earlier this evening, Patton Oswalt tweeted that he was heading to the restaurant. And then this happened. Keep in mind that Patton’s Twitter bio reads “Mr. Oswalt is a former wedding deejay from Northern Virginia”. 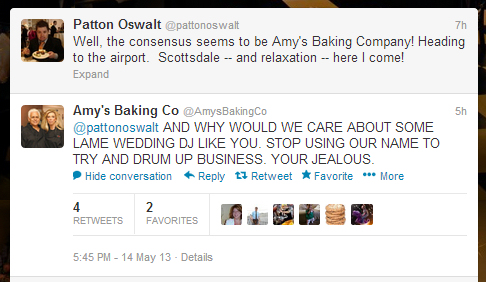 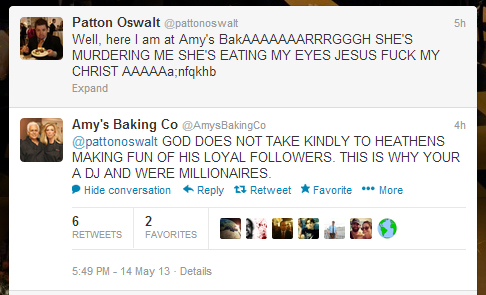 Yeah, cut that out, Patton! You’re just JEALOUS that nobody’s ever heard of you, so obviously you’re trying to ride their coattails. It must suck to not be a millionaire like the owners of Amy’s. Stupid loser wedding dj.

Don’t you just want to wrap yourself in those tweets and let them soak up your tears of joy as you drift off into dreamland?

(Some folks are questioning whether the account is authentic — and Amy’s is claiming all their social media accounts were hacked. Time will tell, but it’s gotta be hard to parody a voice that’s already so far off the deep end.)

If “Amy” and her husband are reading – and let’s not kid ourselves, they totally are – may we recommend sucking on one of these selections for dessert?