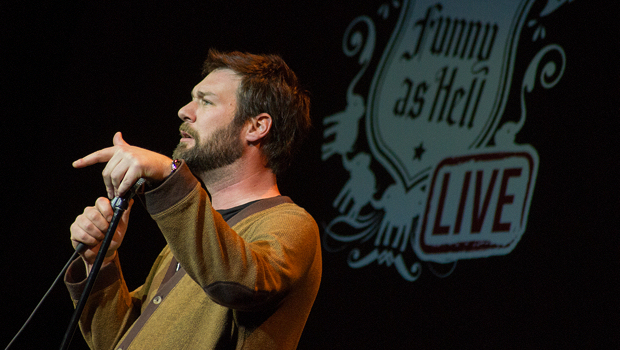 Jon Dore returned to Toronto last Thursday night – proving that we haven’t lost him to sunny California forever – bringing with him a few friends from south of the border who’ve appeared on his series Funny As Hell: Rory Scovel, James Adomian, and the Lucas Brothers.

James Adomian killed with his lengthy Jesse Ventura bit, and an impression of Marc Maron (perching upon a stool as he does) being tucked into bed by Louis C.K. Rory Scovel closed out the show with a German accent that simply wouldn’t die.

The Lucas Brothers were the only act I was previously unfamiliar with. They stood shoulder to shoulder and mumbled bits about losing their jobs and being broke. Fun to watch in a small dose (the shortest of the four sets), but I’m unsure if their energy level could hold me for a headlining set.

Dore introduced videos throughout the show, sketches from the third season of Funny As Hell. All were hilarious, and should be popping up online soon. As awkward as it is to Google “Jon Dore pedophile”, it’s one to watch for. The series airs Friday nights on HBO Canada.