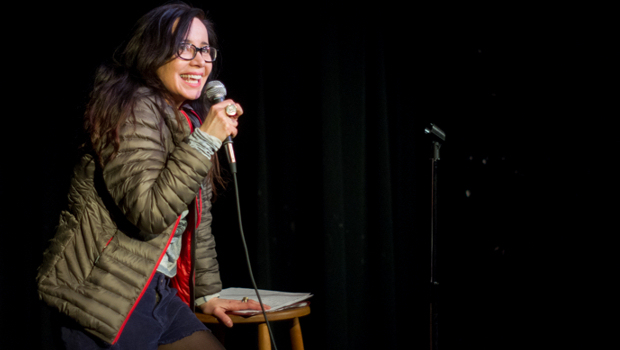 I admit: despite adoring Janeane Garofalo’s early standup, I had no idea what to expect from her performance at Toronto’s Comedy Bar on Thursday night.

Would this be the same Janeane whose 1997 story about witnessing a businessman hit by a cab in New York made me laugh so hard, that when I visited the city for the first time, I went to the strip of Sixth Ave. where it happened like a low-rent comedy nerd pilgrimage? (Yes, this is true.)

Or would this be a purely political Janeane, the Air America host whose image as an outspoken Tea Party-hater has almost overshadowed her comedy?

I was fully prepared for a maybe ranty, maybe preachy, maybe not as funny as she used to be Janeane.

And boy, do I feel silly.

Garofalo was engaging and fun in the early Thursday show, the first of a six-show sold-out run this weekend. Yes, this is essentially the same Janeane we fell in love with in the ’90s.

She started her set talking about Downton Abbey, simply because it was on her mind, setting the tone for a casual show. Topics ranged from life issues like not wanting kids due to the “diminishing returns” after they turn seven or eight, to her Food Network addiction, and back to the “middle-class luxury” of self-improvement you-can-do-anything mantras.

Some material was structured around the stack of printed pieces she brought on stage with her, like showing us the heavily-anthropomorphized fundraising mailer she received from the Sierra Club. Some of it was spontaneous and chatty, and it became hard to tell where the riffing ended and the prepared material began. If she ventured down a path without a joke – happened twice at this show – she called herself on it, which of course got laughs. Ideas seem to uniformly pass through her brain like a Play-Doh Fun Factory. Her take on things is simply her take on things, and it doesn’t matter if the ideas are a bit incongruous. At the top of her set, she can explain how spending money on cosmetics at Sephora seemingly has the potential to solve all of life’s problems (agreed), and an hour later point out the ridiculous standards of fashion magazines. You get what you get. Even when she touches on politics, her opinions aren’t ranty, but simply run through that same filter (eg: “Stephen Harper’s Cabinet Shuffle” would make a great band name).

Often, those citing a comic’s strong “voice” are using the word as shorthand for a drastically novel perspective or delivery style. With Garofalo, it’s just a clear – yet effortless in appearance – sense of who she is and what her outlook is.

She was charming, to boot. She tolerated – and politely engaged – the obnoxious Venezuelan woman and her friends in the front row, who seemed convinced they should respond to everything she said. Some members of the audience tried to shut them up, but Garofalo maintained the patience of a saint, not even chiding them for setting their purses on the stage (the nerve!) or collectively filing out to the bathroom mid-set.

Judging by the number of audience members who whined “nooo!” when she said she was wrapping up, I wasn’t alone in being sold on Garofalo all over again.

Host Nile Seguin threw down the standard emcee line of telling the audience that Garofalo was in the back and to “give it up” for her, but revealed she actually hadn’t arrived yet due to the show’s producer getting pulled over en route for making an illegal left. Also, can we as a society co-opt his line “you dizzy Muppet” as slang for idiot? Please?

Arthur Simeon’s stand-out bit about Canadian immigration being merged with Tim Horton’s destroyed, and came with a tag that destroyed just as hard (though in my opinion, his otherwise-killer closer about being black on the TTC would be stronger if he shaved off the last few lines).

Scott Thompson, who starred with Garofalo on The Larry Sanders Show, talked about his role on the new show Hannibal, before launching into some graphic gay material: bathhouses, fetishes… just a whole lot of cock in general. Essentially doing late show material for an early show audience, Thompson had an uphill battle that he almost won by the time he left the stage.