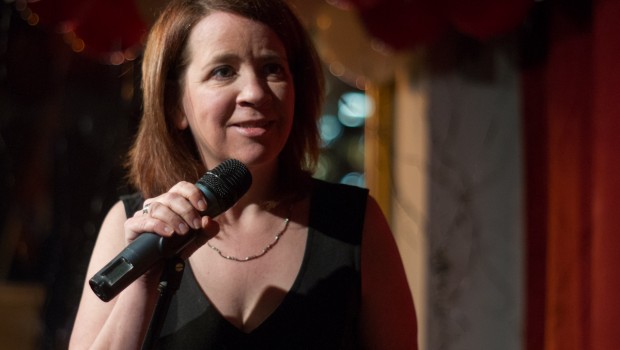 Last August, comedian Jo-Anna Downey approached the mic to accept a Canadian Comedy Award in honour of her contributions to the comedy community. She gave a simple acceptance speech:

“Thank you. And you’re welcome.”

Few in the packed ballroom realized her brevity wasn’t an act of modesty, but one of necessity.

By then, ALS – aka Lou Gehrig’s Disease – had caused her speech to weaken and slur. She was already unable to sustain headlining sets at clubs. She required assistance just to complete hosting duties at her weekly shows at the Eton House and Spirits. Normally vibrant and outgoing, she spoke about dealing with her then still-undiagnosed condition, and how the fear of sounding drunk tempered her impulse to interact with strangers.

As is the way with ALS, her health has only deteriorated, and she can no longer perform at all.

Fundraising is in full-swing, and brainstorming ways to help is a frequent topic of conversation within comedy circles. Jo-Anna’s icon status within the Toronto scene has been documented on this site before, and it’s no surprise that the community is rallying behind her.

The latest way to help: on Tuesday, you can bid on a pair of tickets to the sold-out Janeane Garofalo show this Saturday night at Comedy Bar. Auction details are outlined on Facebook.

Can’t use the tickets? Consider donating to the Jo-Anna Downey Fund.