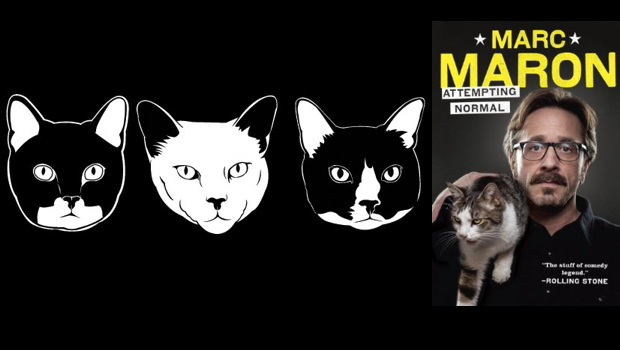 finally has cover art. Check it out in all its glory over on Amazon

But, Marc – and this is kinda an awkward question – who’s the cat?

It isn’t Lafonda. It isn’t Monkey. It has Moxie-like attributes, but not. And Google Image search aside, it probably wouldn’t be Boomer. (I’m about a bit behind in my WTF listening. Boomer could’ve come back by now, right? RIGHT?)

Is this some Hollywood stand-in? How do the other cats feel about it? Is there tension around the cat ranch? And more importantly, how weird is it to be concerned about this?

UPDATE: Marc confirms via Twitter that it’s a “stunt cat”, as his own cats can’t be picked up. No word on how they feel about this, or whether they understand it’s just part of Marc’s job and that the other cat means nothing to him.

Anyway, it looks great, and I’m very much looking forward to getting my hands on it when it’s released April 30 (regardless of any feline drama).