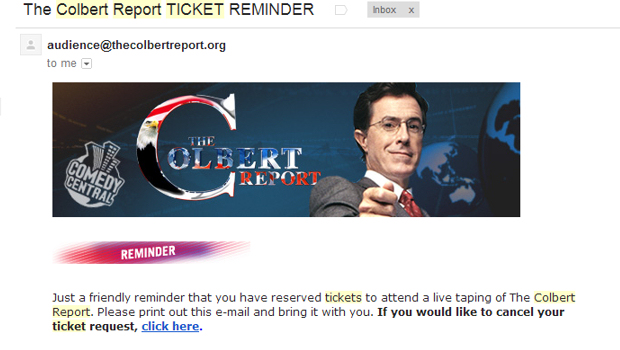 One great thing about attending television show tapings – like the Colbert Report – is that tickets are free. But Comedy Central doesn’t think it should be that easy.

They’ve come up with the Colbert Ticket Grab, a contest that makes snagging Colbert Report tickets more complicated (and less guaranteed) than visiting a website and typing your name into a form.

Sure, most audience-members-to-be know that if you check the show’s ticketing page throughout the day, tickets pop up almost constantly, even for that day’s taping. And many know about the fan-made script that posts ticket availabilities in real time to the @DailyTix Twitter feed.

But what happens if you don’t even realize you want to attend the show until a corporate Twitter account suggests it? Then what?

Well, you can enter to win the 2 pairs of tickets per month that Comedy Central is giving away through their Twitter account. Wow, a whole 2 pairs! That’s, like, 0.13% of the total Colbert Report tickets available per month!

All you have to do is come up with a creative reason why YOU deserve a pair of tickets to the Colbert Report and tweet it to them before the deadline. Then sit back, wait, and monitor Twitter to see if the judges chose your tweet as the most worthy.

Don’t get picked? No worries; they’re doing this again in March, April, May, June, and July. If you put enough effort into your submission, you’ll surely have better luck next time. Clearly, it’s tough to choose from the plethora of amazing entries.

What would make this contest ultra-worthwhile would be if these tickets were VIP. Because then you could skip the hellish hour-long standing-room-only wait in the audience holding room and hang out in the offices instead, where you’d get to see where the 2008 talent releases are filed and how a Webby Award makes a great pencil holder.

Alas, there is no mention of this in the contest info, so it appears these are general tickets (you’ll just have to trust me on the releases and the Webby).

But rest assured, this contest is still epic, if only because of the rules and regulations.

The Contest is open to individuals who are: (i) legal residents of the fifty (50) United States or District of Columbia

Thank God for that! U-S-A! U-S-A! All those international viewers will have to get their butts over to the website and get tickets the easy way. Welcome to America, suckers!

Under section 4, To Enter:

All entries become the property of CP and will not be acknowledged or returned.

CAUTION: ANY ATTEMPT BY ANY INDIVIDUAL TO DELIBERATELY UNDERMINE THE LEGITIMATE OPERATION OF THE CONTEST IS A VIOLATION OF CRIMINAL AND CIVIL LAWS AND SHOULD SUCH AN ATTEMPT BE MADE, SPONSOR RESERVES THE RIGHT TO SEEK DAMAGES FROM ANY SUCH INDIVIDUAL TO THE FULLEST EXTENT PERMITTED BY LAW.