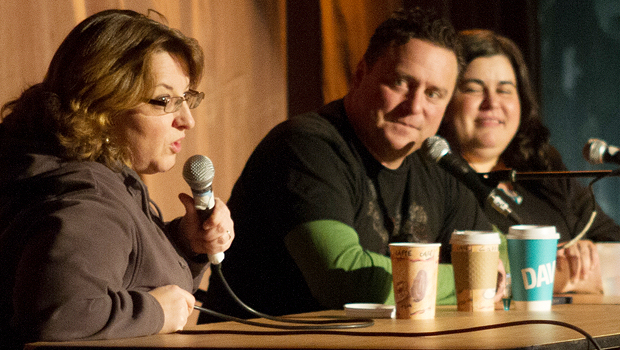 Jackie Kashian brought her Dork Forest Podcast to Toronto for a live taping at the Tranzac Club, on what constitutes a “cold and snowy” Thursday night (we’re not the heartiest of Canadian cities).

Guests Sean Cullen and Debra DiGiovanni started things off with a discussion of game shows, with Cullen bemoaning the stupidity of a contestant on the new Canadian revamp of Match Game (on which he and DiGiovanni both star).

(whose work Kashian called “smart science fiction”). All three comics are fans of the Harry Potter series, and DiGiovanni told how reading The Deathly Hallows

on the subway led to an awkward encounter with an 11-year-old named Chad. She’s also a fan of fellow comic Gavin Crawford’s impression of Snape, as seen on Funny or Die. Kashian brought romance novels into the mix, and described one purchased at a pharmacy for her by Maria Bamford as religious, violent, and historical.

Sprinkled throughout: Cirque du Soleil layoffs; a hypothetical Tarantino film about Jesus (falafel in Jerusalem would be “Chickpea Ball Royale” – Cullen); the joys of high-quality stationery; and DiGiovanni’s cat, Franklin Fonzarelli, celebrating his 18th birthday. All of it as ridiculous and dorky as it sounds.

Kashian performs two shows tonight in Toronto at Comedy Bar. Tickets for the 10 p.m. show are available online or at the door. 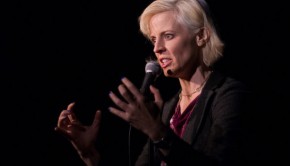