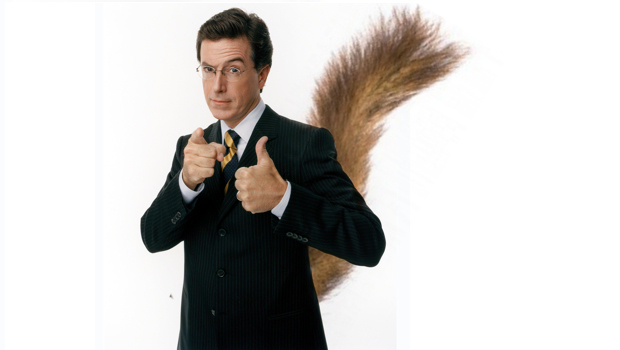 The tale is a great one, but the time it reached Hodgman third-hand (“so it might not be true”), it had been stripped down to only its core message. As he relays it:

“Stephen trained himself to stop feeling embarrassment…. He would do things like walk across the street, very slowly, doing a funny walk, and getting everyone mad at him…. Like, what would be the most embarrassing thing you could do, and he would do it, and he would do it over and over until he no longer felt embarrassed. And it shows, on his his show, that nothing can embarrass him.”

The anecdote (and subsequent insightful analysis) was great enough to become easy link bait for several blogs over the past day, none of which seem to have bothered to dig any further into the story itself. The Huffington Post simply embedded the video saying “whether or not the story is true is almost secondary” (an accidentally beautiful illustration of Colbert’s “Truthiness” concept).

Let me help you out, bloggers: the story is true.

I say that not just because I’ve heard it told live and in-person directly from Colbert himself, but because a from-the-horse’s-mouth version also exists right here on teh internets.

In January of 2006, Colbert did a Q&A in San Francisco. An audience member asked him whether he ever feels embarrassed to act like such a jackass.

“I force myself to do publicly humiliating things every so often. My brother Jay, when I was a kid, used to do an imitation of a squirrel going to the bathroom while it walked. He swore that there was a squirrel that was in this park near where went to college that would do this. It would walk and sort of go to the bathroom at the same time, sort of leaving a trail behind itself. And my sister Lulu used to get so hideously embarrassed when he would do it in public, that to me it is the gold standard of the humiliating thing to do in public. So at least once a year, I force myself to do this in a public place – and by public place I mean like a street corner, like crossing the street – just so I’ll get over the fact that certain behaviors cannot be done in public. Because there’s really no behavior that can’t be done in public as long as it doesn’t hurt somebody. Because I was raised by perfectly nice people, and I married a perfectly nice person. But you have to leave all that behind to do what I do.”

This Q&A recorded and posted to the SFGate website. You can listen to the complete answer – including the audience reaction to the actual impression – starting at the 11:15 mark in this audio clip.