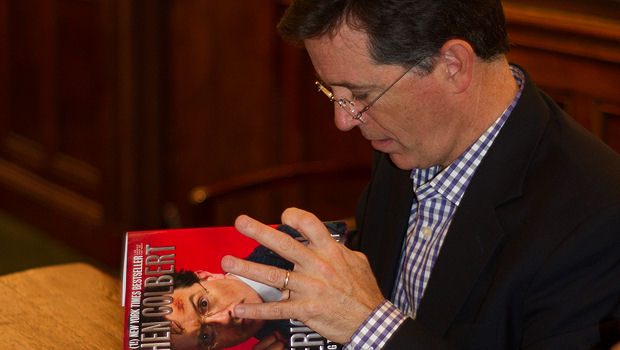 The talk jumped between subjects, from his childhood, to the inspiration for his new book, to the community theatre he did in college, to the celebrity status of New Jersey Governor Chris Christie (not necessarily in that order). There was also lengthy discussion about campaign finance reform and Colbert SuperPAC (much of which Terry Gross covered with him in a Fresh Air interview a few weeks back).

Here are 10 of the most notable & quotable moments from the evening:

Not-So-Secret Joy
How has the character changed over time? “He is more visibly having a good time than he was,” he said, referring to the breaks of character seen with greater frequency. “I am enjoying myself.”

Hail to the Tease
In regards to his lawyer, Trevor Potter, who advised him on his SuperPAC: “I just talked to him today. Got some fun comin’ up.”

Stephen Colbert, Documentarian?
Burns was a guest on the Report in the first few weeks of its run. The show had the idea to create a documentary of the interview itself, while it was happening. The crew rushed to take screengrabs in the control room, age them in the style of Burns’ films, and piece it together in time to run it at the end of the interview. “By the end of six minutes we had a documentary about the previous six minutes, in real time,” he said. “And then we realized we could have just pre-taped it.”

Ignorance is Bliss
On not wanting Comedy Central to give him ratings or demographic information: “Tell me if we have a good night, and tell me if I’m cancelled.”

Religion
On teaching Sunday School to 7 year olds:“It’s an honour and a privilege to have to explain your faith in a simple way.”

Thou Shalt Not Air
In 2006 Colbert famously asked Rep. Lynn Westmoreland, who was sponsoring a bill to have the Ten Commandments posted in the House and Senate, to list the Commandments (he couldn’t). But three years earlier in a Daily Show field piece, he stumped Christian Coalition of Alabama leader John Giles with the same question, with the same results (he only got three of them). Colbert could sense Giles’s devastation throughout the rest of the interview, and anticipated he’d try to prevent the tape from airing. Colbert was alone with Giles after the interview, and commented on a bible verse etched onto a stone in the Giles’s yard. Giles told him it was in honour of his son who died in a car accident, and shared some of his son’s poetry with Colbert. And, as predicted, made a heartfelt plea to not release that part of the interview tape. Colbert promised. In the car with his producer after, Colbert learned the interviewee had cornered his producer in a similar way when Colbert was in the restroom, making him promise as well. The piece aired, but without the question.

Rising to the Challenge
Jon Stewart providing advice when the Colbert Report was born, and how he addressed the uncertainty of the show’s success with Stephen: “He said ‘the only way I’ll be mad is if you choke. Because you have no reason to’.”

Tragedy/Comedy Connection
Describing life in a suddenly empty home after the death of his father and two brothers, and his other siblings leaving for school or marriage within the subsequent eight months: “Mom wearing black, shades drawn, and nobody laughing. And I thought I would fix that.”

Only Human
When discussing the White House Correspondents’ Dinner, “I’m always nervous before I go infront of an audience,” he said, noting that he was nervous before this night’s event.

Again, Only Human
When Barack Obama was proclaimed the winner of the 2008 election, Colbert appeared to tear up during the Daily Show’s live show. An audience member asked: was this genuine, or a bit? “I… was moved,” he said coyly. We never got a straight answer (although I think we know). Instead, he went into a story about the bit they did immediately after, which required him to wear headphones and goggles to block out the news “For the last 7 minutes of Jon’s show, I couldn’t see.”

Enjoy this article about Stephen Colbert? Try these!