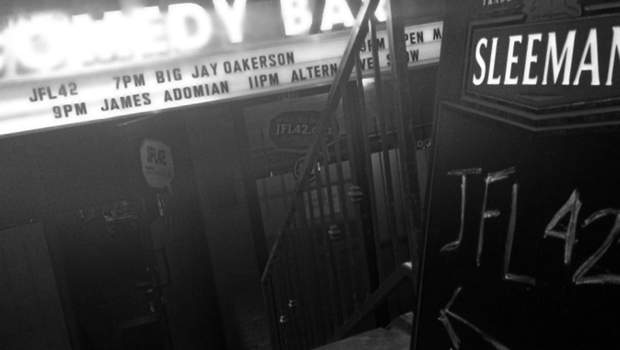 First thing’s first: Third Beat’s top picks of JFL42 were, for the first time, revealed in print. Steal a copy of the Sunday edition of the Toronto Star from your neighbor’s recycling bin, or better yet just read my top three on the Toronto Star website.

This is one of those posts where I take off my journalist hat (which I believe is still a fedora) and just give you a casual first-person account of all the leftovers I didn’t previously blog. This is lengthy (two-parter!), and it’ll be painful for all of us if I get formal.

You good with that? Cool. Here we go.

Louis CK at the Sony Centre

Understandably, C.K. received a standing ovation when he walked out, and another wave of excitement upon opening his mouth.

“You cheered more when I spoke, like ‘oh, he’s gonna talk instead of just wave’,” he said.

A few audience members eager to engage with him off the top.

“Shut up. Shut up for the rest of your life,” he said, successfully ending the shout-outs.

He’s reached a point of accepting his body’s flaws, not caring any longer that his vessel could use some work.

“I have a job, and I get laid, and I’m doing it with what most people would say is a disaster,” he said.

He talked about having gratitude for even having a body at all, and slammed the marketing of a face cream that promised removal of laugh lines, therefore eliminating “any evidence of joy”.

“You have a body. You get to walk around in it… put chocolate in it… you get to fuck with it…,” he said.

He embraces his age, saying that everyone over 45 is automatically smarter.

People his age remember Nixon resigning, but “the rest of you know it happened because you saw a joke about it on the Simpsons,” he said. 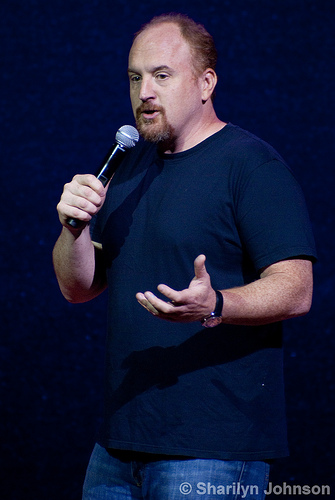 No press photographers allowed at the JFL42 show, so this shot from the 2010 edition of JFL Toronto will have to do. It’s not like the outfit has changed any. Photo by Sharilyn Johnson.

One standout story involves him moving into a fancy new apartment building with a private courtyard, and having his presence challenged by a neighbor who assumes he doesn’t belong there. It’s so well thought-through, and so well-acted, that the twist at the end (which I won’t spoil) comes as a legitimate surprise.

One small detail of this bit that I have a problem with his need to tell us how he’s the only resident in this fancy building who rents, and that the others all own their units. It may or may not affect our perception of the status gap between C.K. and his fellow tenant for the purposes of this story. But it feels disingenuous to portray himself as a financial underdog at this point. We know he’s rich. Loaded, in fact. But as fans, we caused that, so safe to say we’re comfortable with the idea. Proud of it, even.

In another story, he recounted losing “a game of decency chicken” when he was the only person willing to help an old lady who fell down at the airport. He begrudgingly assisted her, and begrudgingly ended the story on a sweet note.

His “of course, but maybe” closer is likely to earn as much viral attention as his “everything’s amazing / nobody’s happy” bit from a few years back. The idea is this: he makes a popular, politically correct statement (“of course [this thing is true]…”), follows it with an unpopular but realistic comment (“…but maybe [this is true too]”), and then again repeats the first “of course” as if to protect himself from a hypothetical argument.

One thing the JFL42 organizers probably shouldn’t do is allow media to only attend the same show that they herd all the VIPs and sponsors to. Any reviews you’ve read were of the first of his four shows, and we had the pleasure of filing into the Sony Centre alongside half-interested well-dressed condo owners who got the tickets for free from some guy at work.

A lot of those same people missed the openers. K. Trevor Wilson did a great job off the top (as I hear he did at Patton Oswalt’s show, which I arrived too late to catch). Poor Todd Barry had to do his entire set with the house lights turned back up, because there were so many people who hadn’t taken their seats yet. Seriously, people. He slogged through, of course, but it was nearly impossible for him to keep the attention of the back half of the theatre with so many peripheral distractions.

Get season 2 of Louie on Blu-Ray from Amazon!

Louis C.K. at the Alternative Show

C.K. also made a surprise appearance on Thursday night’s Alternative Show at Comedy Bar, which instantly became the talk of the festival.

It’s common for famous comics like him to drop into clubs in New York, or L.A., so it’s hard to explain to a non-Torontonian reader what a truly big deal this is. We don’t have famous people living in Toronto. We have no star system. There’s nobody here who drops in and does 10 minutes on a show, and then slips out before they’re mobbed with photo requests. Just doesn’t happen.

The official runtime of these 11pm nightly shows was 70 minutes. Anyone who actually attended one is laughing at that number right now.

Just before 1 a.m., Louis entered the Comedy Bar greenroom. By all accounts, not much was said in the half hour he spent in there, and most people who weren’t set to perform on the show scattered. 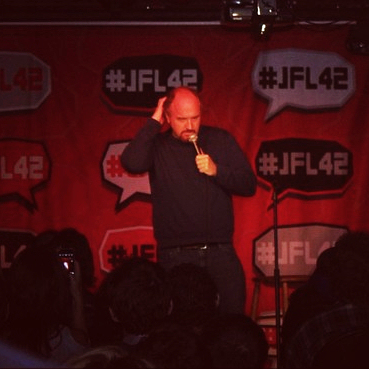 By happenstance, I ran out to the bar area for a moment during W. Kumau Bell’s set (also a surprise addition). A friend of mine – who had been hanging out backstage – made a beeline for me and said “Louis is here” in a tone normally reserved for the phrase “there’s been an accident”.

I scurried back into to my seat at the back of the showroom, armed with my secret, and I have to admit: the anticipation of hearing the crowd lose their minds was almost as enjoyable as the set itself.

Lose their minds they did. A huge, and almost disbelieving ovation greeted him, with a few whisper-shouts of “oh my god” and a whole lot of cellphone cameras illuminating. (From the looks of it, everyone seemed to stick to still photos only, because that’s just how we roll as a polite nation.)

I was surprised he used his set to do two of the same bits he was doing at the Sony Centre: the bit about the old woman in the airport, and the story about the courtyard in his new apartment complex. Every JFL42 passholder got a ticket for those shows, and only passholders were allowed into the Alternative Show. 25% of this audience had already seen this material once that evening.

Not that it mattered. For about 15 minutes, he killed exactly the way you’d expect Louis C.K. to kill. He walked offstage and directly out of the club to avoid the mob.

The timing was unfortunate, as a small percentage of the audience called it a night before C.K. went on. We are a very transit-dependent city, and some would’ve left to catch the last subway just before his set (this is why I live in the neighbourhood, folks). But all-told, there were still about 100 people in the place who earned top-level bragging rights for years to come.