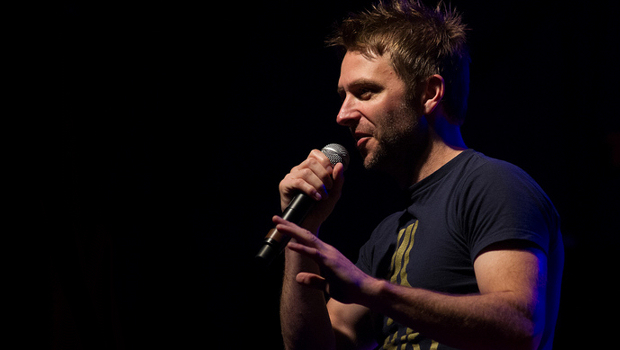 Here’s the last of what went down at the inaugural JFL42.

The more intimate of the two Nerdist podcast recordings went down at the Mod Club on Friday evening (the other was Thursday at the Queen Elizabeth). The guest was Andy Kindler, who I’m pretty sure is stalking me.

The whole thing will be released (eventually), so I won’t go into great detail except to say I think this will stand out as one of the stronger live episodes. Kindler talked candidly about going after other comics in his State of the Industry speech every year, including Louis C.K. Great insights from him that I’ve never heard before (and I’ve spent a lot of time talking with the guy!). Best joke award goes to Matt Mira, for the Family Guy dig. Must listen to appreciate.

The nice thing about the JFL42 pass system is that the artists made new fans in the process, as people were able to make random show choices without an additional cost. One friend of mine vowed to become a Nerdist listener after this – mostly for the entertainment value, and in part because “that Chris guy is so hot”. I hear ya, girl.

Stay tuned to Third Beat for an interview with Matt Mira, unlike any interview you’ve ever seen on a comedy blog. You’ve been warned. 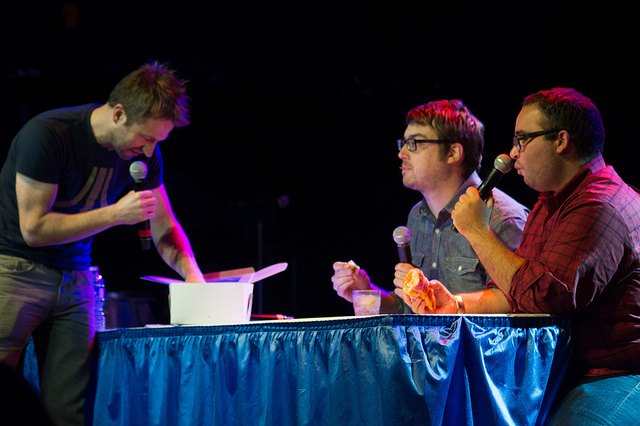 Despite the excitement of the Louis C.K. drop-in on Thursday, there are a few other Alternative Show highlights that must be mentioned.

Wednesday night, Todd Glass closed the show to a very small crowd (I think it was about 2 a.m. at this point). He did his “bad improv” bit, where he tells us he’s going to pretend to be a bad improviser who takes audience suggestions, but use a suggestion that wasn’t actually said. His instruction to the audience is to not let him get away with it – to yell and scream, and to let one audience member be the ringleader of the whole thing.

Someone happened to record the results which you can see here on Youtube. Full disclosure: the audience ringleader, Brian McIntosh, is a friend and former improv classmate of mine. And he’s brilliant. (The great part here is that Brian posted it on Facebook not telling anyone it was a bit, and some of his friends think it’s real. They’re very concerned. It’s hilarious.)

And Friday? Friday was my favourite of all the Alternative shows.

I filed my Toronto Star picks prior to this, but I did cite the team of Glass, Andy Kindler, and James Adomian as one of the top experiences of JFL42. Each night’s silliness between the three escalated, but nobody could have expected them to top themselves the way they did Friday.

If you’ve never experienced Adomian’s impressions of Kindler and Glass, just know that they’re so accurate they’re spooky. He has both the voices and the mannerisms down pat, and has absolutely no qualms about performing them infront of the guys he’s impersonating.

The seeds of silliness were planted partway through the show. Kindler was about to introduce another act when Todd Glass did a pratfall through the greenroom curtain onto the stage, and pretended someone had pushed him.

He repeated the gag during Kindler’s next intro.

I don’t recall the exact order of things. All I know is that Kindler, Glass, and Adomian somehow ended up on stage together for what had to be close to half an hour. 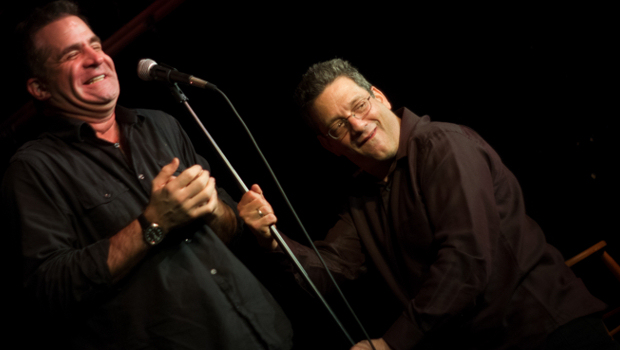 Adomian doing Kindler for Kindler, and then with Kindler. Repeat the process for Glass. Adomian being left on stage while Kindler and Glass hide in the curtains, and then Adomian hiding in another set of curtains, leaving nobody on stage but three guys still using two mics and continuing their bits. Todd hiding backstage out of genuine embarrassment when Adomian does his impression of his laugh.

I admit wishing that someone had recorded it, because it can’t be explained, and part of me worries that I won’t remember how that set made me feel (even a few days later, it’s fading).

I see a lot of comedy. I like most of it. I genuinely am entertained by only some of it. This? This filled me with joy. Actual, real joy.

I don’t think I’m alone. It was as though both the audience and the performers had let go of some unspoken pretense, and fully surrendered to whatever this ridiculousness was. We were collectively giddy, with no shame. It was a beautiful thing. I want to believe that this could somehow be repeated, somewhere, somehow, but I think I may be asking for too much.

-The idea was that if you use a credit for a show, and you checked in from the venue, you’d get your credit back and could use it for another show.The credit/pass system seemed to work well overall (many of us thought it would be disastrous), though a few folks I talked to never got their credits back after checking in. Checking in itself was an issue too, since Apple kinda fucked everyone on the maps front last week. Live Nation was pretty darn quick to fix issues, though, so good on ‘em.

-I mentioned this in my Pete Holmes review, but it worked really well using rock clubs as comedy clubs. It isn’t something generally done in Toronto, though JFL has done it for their Montreal festival for eons. The Garrison was touted as the winning venue by many, including Todd Barry.

-The “42” in the festival name was to describe the 42 “things” (or “acts”) of the festival. But the disparity between the good “things”, and the lame “things” was pretty pronounced. Did any of you actually claim your free donut? Did anyone waste a credit on a Strombo taping? It’s easy to find room for improvement here.

-Can we not do shows at the Queen Elizabeth Theatre, please? Those of us who depend on transit despise that venue simply for the half-mile walk we’re forced to make. No wonder nobody wanted to see the late Amy Schumer show on a Sunday night.

In all? A great week, with great shows, which somehow managed to recreate the vibe of the Montreal festival.