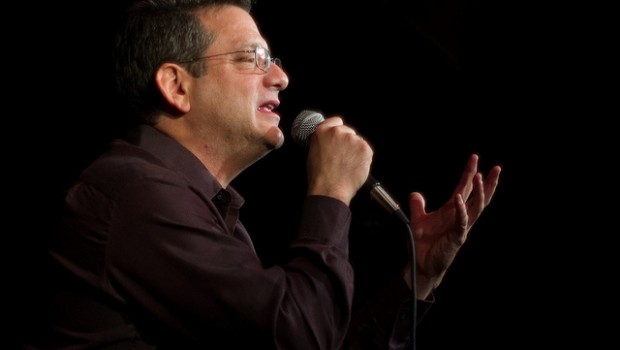 While any reasonable person would be in bed on a weeknight, JFL42’s unofficial party is just getting underway at Comedy Bar. The Alternative Show, running nightly through Friday, is hosted by Andy Kindler and features the kind of lineup that comedy nerds fantasize about flying to Los Angeles for. (I can’t be the only one who openly weeps while browsing the UCB LA schedule… right?)

Monday’s and Tuesday’s editions were standing room only, but while Wednesday’s crowd was smaller and less boisterous, that didn’t stop the comics from having a ball on stage.

Todd Barry campaigned to have bloggers rank his set as the #1 moment of the night, and while the argument was convincing based on his slams of Humber College alone, the competition was just too stiff to call: Pat Thornton performed a bit he originally did infront of Kindler at an impromptu post-show gathering in Comedy Bar’s cabaret space last fall, which consists only of him passionately lipsynching Adele’s “Someone Like You”; James Adomian took the stage as the Sheriff of Nottingham, and got up close and personal with the male audience members he grilled about Robin Hood’s whereabouts; and Sean Cullen’s lengthy “Southern Lawyer” impression continues to please.

The best, though, is when things (inevitably) get purely ridiculous between Kindler, Adomian, and Todd Glass. United by their common love of meta-schtick, their comfort on the Comedy Bar stage (all three play there when they come to town), and Adomian’s uncanny impressions of Kindler and Glass, the show becomes a circus the moment they start improvising. These guys have so much fun playing off each other that you start suspecting that all this tomfoolery would still be happening even if an audience wasn’t there to witness it.

The Alternative Show continues Thursday and Friday nights at 11pm at Comedy Bar. Note: clear your schedule for the rest of the night, because the official 70-minute running time of this show is meaningless.

Photos of Wednesday night’s Alternative Show, copyright Sharilyn Johnson. May not be used without permission. James Adomian as the “Sheriff of Nottingham”