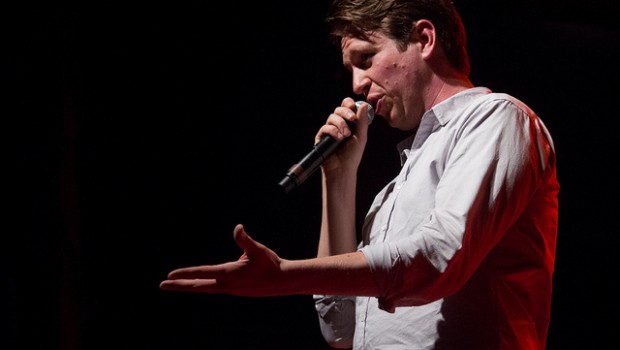 Let’s get the inside joke out of the way first: Pete Holmes is McDonald’s. (This is a good thing.)

Holmes played the first his six shows at JFL42 – the Toronto edition of Just For Laughs – to standing-room-only crowd at the Mod Club Monday night. (Typically a music venue, the Mod Club is well-suited to comedy, and invokes the vibe of the many similarly-booked shows at the Montreal edition.) There’s just something about a guy on stage who can’t hide his joy for his job that’s infectious. Holmes has the added bonus of always seeming joyful about life in general, and an audience can’t help but be pulled into that. Who needs cynicism in comedy, anyway?

He kept the set loose, improvising with the audience throughout bits about using Google Maps to get out of a bad neighborhood in Atlanta, the rapture, and only making his bed when he thinks he has a shot at bringing a girl home. He took one request – for the bit “Magic Sounds” off his cd, Impregnated With Wonder

His crowds are fully open to engaging with him when invited, as there’s little risk that these moments will end in embarrassment (even for gentleman in the front row who he nicknamed “No Pants Face”).

He referred to his closer as “new”, and this one’s sure to anchor the set for a long time. At first, we feel like we’ve heard this before: answering a telemarketer’s phone call and screwing with them, because you know they aren’t allowed to hang up on you.

“I feel some of you wanting this to be funnier, but it’s it a true story,” he said.

But how it ended? Nobody saw coming. The payoff gave him a sustained, uncontrollable laugh to go out on.

It was a solid show from top to bottom, and already being talked about as the favorite among festivalgoers (including yours truly).

Pete Holmes performs two shows tonight at 9pm and 11pm at Revival, and tomorrow night at 7pm at the Garrison and midnight at Second City.