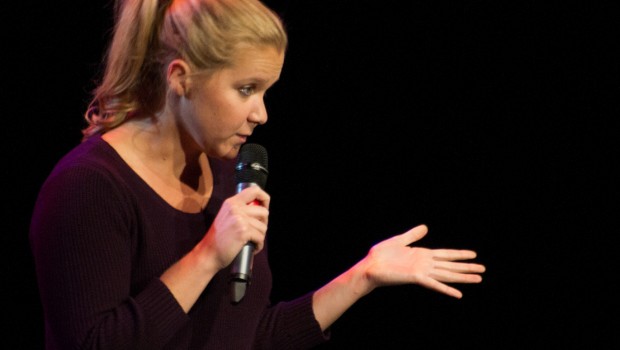 Looking at the packed Sunday night schedule at JFL42, you’d think none of us had to work the next day. Two of the many shows on deck: Kelly Carlin’s A Carlin Home Companion at the Drake Hotel, and Amy Schumer at the Queen Elizabeth Theatre. Kelly Carlin performs A Carlin Home Companion at the Drake Hotel. Photo by Sharilyn Johnson, may not be used without permission.

Kelly Carlin (that would be George’s daughter) has been touring A Carlin Home Companion for a while, and I’d kept my self relatively spoiler-free in anticipation of seeing it someday. I went in with assumptions that this would be a multimedia lecture. I got the multimedia part right. This is a traditional one-woman show, 90 minutes of tightly scripted and acted material about home life with her famous father.

Punctuated with a combination of private family photos and clips from George’s HBO specials, she ran through the history of her parents’ relationship, how she came into the world via “a little weed, a little scotch, and a little something called the limbo”, and the tumultuous childhood she endured under two often-fighting, often-intoxicated parents.

The theme that emerges is her own struggle to fully embrace her desire to be creative, and step away from the safety of her father’s shadow. It was a complicated aspect of their relationship, and without George’s full approval she shelved her original one-woman show and a memoir.

Kelly’s climactic moments of revelation have a heavy dose of California-style zen-like self-help whatever-you-want-to-call-it. The flowery psychological phrasing may come across as a little – for lack of a less-appropriate term – “hippy dippy” for some audiences. But that’s the only complaint to be made about the writing. It’s tight, emotional when necessary, and covers an incredible amount of material.

While George plays a pivotal role, this is very much Kelly’s story. I don’t feel like I came away with a ton more insights into George than I went in with, but I’m also one of those people who has listened to Kelly interviewed on podcasts and read Sally Wade’s book. I think that’s what makes her personal story so valuable to fans: it may not give us much in the way of trivia, but it does give us a perspective we’d never find anywhere else. On its own it would be a strong enough story even without the Carlin name. Amy Schumer performs at the Queen Elizabeth Theatre. Photo by Sharilyn Johnson, my not be used without permission.

Then it was off to Amy Schumer at the Queen Elizabeth Theatre.

I’ll put it this way: Ever feel like you’ve shown up late to the party?

The buzz in JFL42 circles midway through Sunday evening was that Amy Schumer’s 7pm sold-out show had been a near-epic experience.

The late show – added to the schedule only a week earlier – was barely half full. In a venue as large as the QET, that’s an an energy killer, and Schumer never managed to fully connect with the listless and overly polite crowd.

Schumer herself addressed the issue near the top of the show.

“Are you guys going to be like this all night?”

She asked if we were drunk. Silence.

She asked if we were high. Finally, a response.

She jumped from topic to topic, sexually charged and edgy as expected from Shumer: people’s perception of her as a slut, taking Plan B, attracting black guys, the “grey area” of rape (“a guy will see a girl sleeping and sees that as a suggested ‘no'”), dating a pro wrestler, and drinking responsibly now that she’s in her 30s (“I’ve never woken up from a blackout and been like ‘why’s this pilates mat out?’”).

The standout of the night was the series of unaired jokes from the recent Comedy Central Roast of Roseanne For Wayne Brady: “You’re like an Oreo. Black on the outside, and if you’re put in liquid you drown.” For Sharon Stone, adoptive mother of three: “So cool that you said yes when God clearly said no.”

The set petered out after an unfruitful audience q&a, and at the 45 minute point went into her short, abrupt closer.

Can’t complain about the jokes, but I can’t imagine Schumer being happy with that set overall. Did she do everything in her power to win us over? Hard to say, but I think the room itself has to take at least part of the blame for Schumer’s difficulty gaining momentum with the audience.