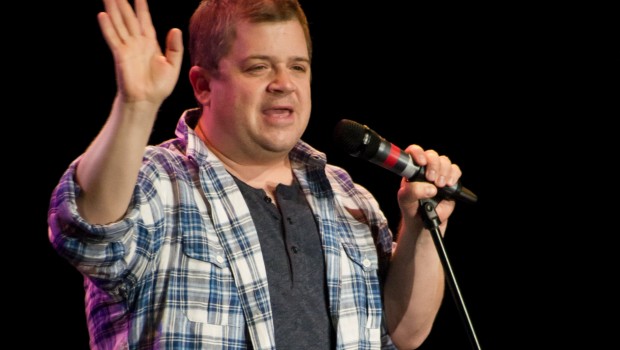 With no individual tickets available, audience members buy festival passes and reserve spots for each show online, a buggy system that’s been a hot topic among Toronto comedy fans. To top it off: the seating for the shows, even in this 1,300-seat venue, is general admission.

Somehow, it wasn’t disastrous for the near-capacity late show crowd. Not a single gap was left in the lower level seating, and the show started right on time (yes, the late show started on time).

But the effort these folks put forth to see Oswalt proved to be well worth it.

Oswalt opened with a riff on navigating his way to the Thrifty car rental counter at the Eaton Centre earlier that day (he apparently drove to a show in Rochester, NY the next night – not that we all haven’t considered renting a car to get to the Queen Elizabeth). Patton Oswalt performs at JFL42 in Toronto. Photo by Sharilyn Johnson, may not be used without permission.

The set was top-heavy with weight-related material: Lean Cuisine purchasing as a catalyst for suicidal thoughts (he did this one on Conan back in the spring), trying to wedge himself into jeans from one of Macy’s younger/hipper/slimmer brands, and not wanting to be so fat that he has to attend his daughter’s high school graduation riding a scooter.

He talked about his music tastes evolving, and how much easier it is to simply avoid music he hates instead of being militant about it like he was when he was 27. Oswalt’s point was lost on – but proven by – a smattering of audience members who cheered his “Nickelback sucks!” example.

The mic came off the stand for a brief session of crowd work halfway through. His initial few interactions with the front row were with lovely, perfectly normal people. He finally got some traction by asking one man why he’s so tan, and got educated about our regional culture of “cottaging” (which is much different than the Urban Dictionary definition).

Fatherhood entered the mid, with two of the biggest hits of the night: recalling his daughter’s innocently racist reaction to seeing a black man in a Starbucks, and how he makes himself feel superior by giving snarky responses to the viewer interaction component of her Jake & The Never Land Pirates

Shifting topics, he wound things down with a surprisingly endearing story about an encounter with prostitute while working in Atlanta in his 20s, and making the mistake of listening to her tragic life’s story before having a chance to have sex with her.

Even though the house lights were up and all butts had risen, Oswalt returned to the stage to treat the crowd to a classic: a story told on his 2004 album Feelin’ Kinda Patton

on a track entitled “Toronto Open Mike”. As the story goes, he hosted an amateur show at Yuk Yuk’s here in Toronto, and witnessed an obviously drugged man named “Dr Pepper” go on stage and have blackouts throughout his set. He delivered it almost word-for-word as on the album, and with the same genuine sense of glee at having witnessed it.

JFL42 continues all week at venues throughout Toronto.

One Response to JFL42: Patton Oswalt