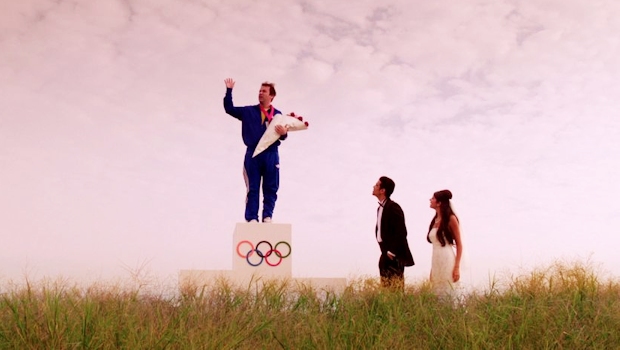 Sleepwalk With Me, the film version of Mike Birbiglia’s acclaimed one-man show and book of the same name, is beautifully shot, well acted, and as a film unto itself is a homerun.

It tells the story of Birbiglia’s real-life experience with a sleeping disorder that causes him to physically act out his dreams, interwoven with struggles with his long-term girlfriend and trying to get his comedy career off the ground.

Only fans of the previous incarnations of the story would have any grounds for complaint.

The liberties taken with the story’s details in the film – some small, some big – seem like an unnecessary fictionalization of a true story so beloved for its honesty. Prime example: Mike’s name has been changed to Matt.

At a Q&A after last month’s screening at Just For Laughs, Birbiglia told journalist Richard Crouse “it’s not a documentary.”

“The stuff in the movie that you wouldn’t think is real is real, and the stuff you think doesn’t matter isn’t real,” he said.

It’s a difficult as a viewer to understand the justification for this, especially since the original story has already had a long life in other formats.

As seen in the trailer, Birbigila narrates the story in the present-day, from his car. Birbiglia told Crouse that originally, the narrative monologues were shot within the scenes themselves with Matt turning to the camera.
The result seemed “campy and not sincere,” he said, and those portions were re-shot after the film was submitted to the Sundance Film Festival.

This was the right call. It means that we are in the future also, not just Birbiglia, a perspective that suits this story best. Even though we know he’s okay, the sleepwalking scenes are harrowing regardless, with surreal shots of Birbiglia’s dreams cutting to and from his actions while sleeping (like perched precariously atop his dresser, thinking it’s an Olympic podium).

Anyone who’s heard Birbiglia tell this story even once can probably recite “La Quinta Inn in Walla Walla, Washington” at the drop of a hat, but this is another odd change to the story. The story’s climactic scene still happens at a La Quinta Inn, but in the somewhat less satisfying location of Delaware. (There is a payoff, though: seemingly real photographs of the incident in question appear throughout the closing credits.)

Comedy fans will love the onslaught of cameos in the film, including Kristen Schaal, John Lutz, Wyatt Cenac, and Jessi Klein. Birbiglia and producer Ira Glass wanted Marc Maron in the film so much that they paid his travel costs out of their own pockets due to a lack of budget. It was worth the investment, as Maron’s turn as seasoned road warrior “Marc Mulheren” is a highlight.

Whether it be driving hundreds of miles for a low-paying one-nighter, or the camaraderie of a bunch of struggling comics crammed into a room watching Comedy Central, the way the film romanticizes living in the comedic trenches is on par with Seinfeld’s Comedian.

And there are lovely moments dropped in that are reflective of Birbiglia’s real-life journey, like the brief scene that represents his comedic success: walking into New York’s The Comic Strip, a venue that was instrumental in his career ascension.

There’s plenty to love about Sleepwalk, and everything to love if Birbiglia fans can silence the voices in their heads asking “‘hey, why’d they change that?”