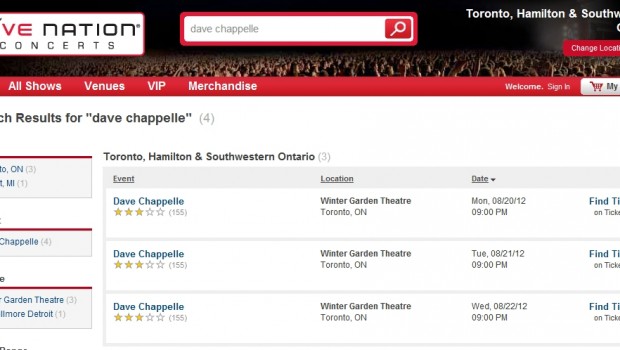 Update: Tickets were intermittently available on Ticketmaster late Thursday night, only through the links provide on the Live Nation site (shows didn’t appear in Ticketmaster’s search results). By Friday morning, only single seats remained. If you missed out, be sure to continue checking Ticketmaster, as tickets are often released at the last minute.

It was a good idea while it lasted. Shortly after 9pm Thursday night, Live Nation announced via their official Twitter that Dave Chappelle would be doing three shows at the Winter Garden Theatre in Toronto (capacity 992) next Monday, Tuesday, and Wednesday nights.

Clicking through to Ticketmaster indeed showed three shows that went onsale at 9pm Thursday evening. But just one click further? And they were gone. No explanation from Live Nation. The shows don’t appear on the Winter Garden Site, but they do on the Live Nation site, with dead links to the now-nonexistant Ticketmaster pages (“Sorry, but this event no longer exists in our database.”).

What’s the deal? Can’t even begin to guess. But keep your eyes on Ticketmaster, and you might score yourself some sure-to-be-hot Chappelle tickets once they sort this all out. 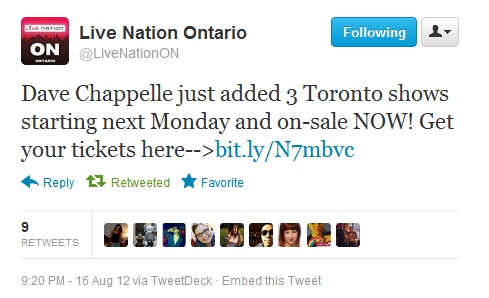 6 Responses to Dave Chappelle in Toronto? Or not?