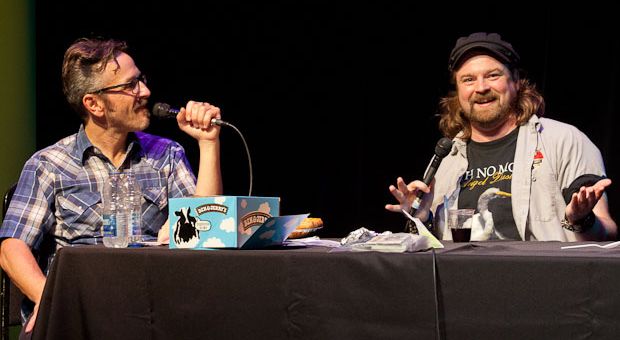 “I don’t have great judgment, but I’m great at judging” – Marc Maron

In what’s a possibly-slash-hopefully new tradition, Marc Maron closed his 2012 Just For Laughs stint with a live taping of his WTF podcast and a full stand-up show on Saturday night.

At this point I know Maron more from his podcast than anything else, and haven’t seen a lengthy solo set from him in a few years. And while I’m sure he’ll take this the wrong way if he’s reading: there were no surprises.

What I mean is, Maron is the ultimate what-you-see-is-what-you-get guy, on his podcast, in his standup, and just in conversation. There are no strict lines drawn between Marc/Marc/Marc, and his standup doesn’t smack of a “show” by someone who is “on”. He gives the illusion that he’s just talking, which is what drew us to him in the first place.

Stories from his seemingly bullet-pointed WTF intros made cameos, molded ever-so-slightly into true material. Fans are well-versed in Maron’s go-to format: recounting his internal dialogue during a particular situation, and attempting to sort through his own logic and intention. He recounted how at last year’s Just For Laughs, he silently judged a man for wearing ugly shorts, but decided let him get away with it when he saw a large scar across his head.

While we can all relate to having truly bizarre thoughts at times, most of us would just feel fleeting shame and continue on with our days. Maron examines exactly what the hell his brain was aiming for in those moments (and examines, and examines), finding the deepest flaws in his thought process. Frankly, if we all did the same, we’d probably scare the shit out of ourselves. Better him than us.

While I feel the most engaged with the bits that focus on the most specific anecdotes, I’m glad he breaks the set up by examining his philosophical quirks on a slightly more general level, like in his fear of Hasidic Jews and disdain for vegans.

He closed the show with an ultimately endearing story about a screaming match with his long-term girlfriend, who was in attendance. A bold move, which may have already birthed a whole new closer.

After a quick flipping of the room, the live WTF got going. In the wake of the beyond-sold-out WTF taping at Underworld a year ago, it was wisely moved into a venue with about four times the capacity (the Place des Arts Cinquième Salle).

Off the top, a theme was set in motion for the duration of the two-hour recording (which is expected to be edited down slightly). Maron read out an email from a listener named Heather, whose assurance that she was going to bake him a peach pie was accompanied by an in-depth psychological analysis of those who do such things: “feeders” who take pleasure in Maron’s own self-loathing and eating issues, and who deep down are worried that if he loses those hang-ups, he won’t be funny anymore. 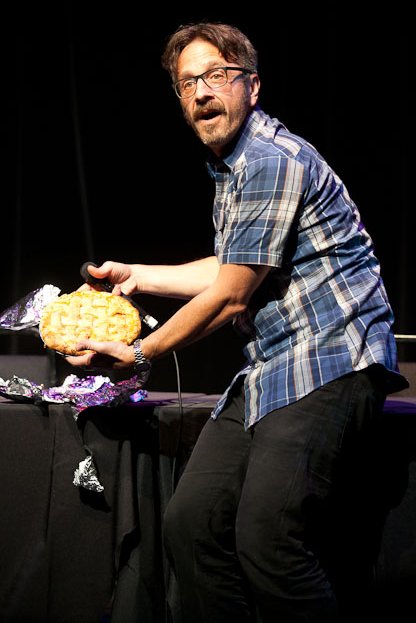 On cue, Heather approached the stage with as much confidence as one can muster infront of that many people, and presented said peach pie. Maron couldn’t resist. He dug into it, as did almost every guest who took the stage: Mike Wilmot, Sean Cullen, Nikki Glaser, Godfrey, and Chris D’Elia (the only hold out was the gluten-free Glenn Wool).

It was an often-ridiculous couple of hours, as the best live WTFs are. First guest Wilmot had Maron laughing so hard he could barely breathe, but it was Cullen who made things truly silly with his observations on Montreal’s festival culture (“if I threw this spoon on the floor, a festival would happen around it”) and describing his bizarre series of children’s books he wrote.

It was obvious that not everyone in attendance was convinced of the books’ authenticity, given the twisted Cullen-like improvisational nature of the plot lines. But they are for real, and you can even buy them on Amazon: Hamish X and the Hollow Mountain

, Hamish X and the Cheese Pirates

Glenn Wool was the only comic to match Cullen’s lunacy, at one point leading the audience in a rousing rendition of Alouette (prompted by an explanation of Canadian football), and is likely the first guest to ever tackle Maron, pin him to the ground, and fake beating him up. Yes, that happened.

As an audience, we were spent. Partly from laughing so much, and partly because the sudden lack of air conditioning had brought us to a slow boil. Post-show, Maron hypothesized that either the show went well beyond an automatic shut-off time for the Place des Arts complex, or the staff just really wanted him to wrap it up.

And as for the remainder of the peach pie? It made the rounds at the festival afterparty. If I may play food critic for a moment: it was delicious.