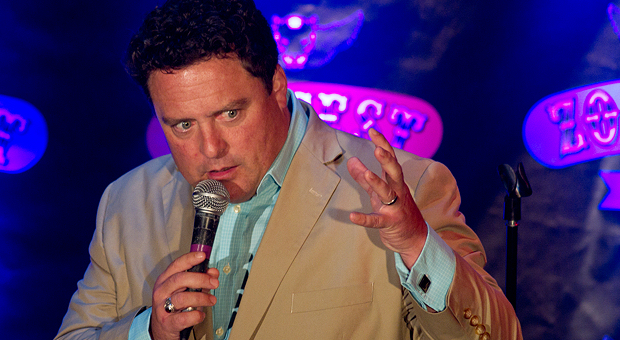 “Alternative” is really the only genre of comedy Just For Laughs can put at Katacombes, a tiny rock club that looks like it’s straight out of a Pamela Des Barres memoir.

Two of the Friday night shows were indeed an alt comedy nerd’s dream come true: Hot Tub, hosted by Kristen Schaal and Kurt Braunohler; and the Alternative Show, hosted and curated as always by Andy Kindler (now expanded to four nights from the traditional two).

Kurt & Kristen were their regular endearing selves off the top of the Montreal edition of their Brooklyn-based show, pitting two audience members against each other for the chance to date Kristen. The voice actors of Bob’s Burgers, fresh off their live script reading a few blocks away, comprised the surprise lineup: John Roberts, Dan Mintz, Eugene Mirman, and Jon Benjamin, plus solo sets from Schaal and Braunohler.

Hot Tub had no shortage of variety: Roberts introduced us to open micer character Pauly P, Benjamin read from a Holocaust memoir, and Schaal showed us her skills as a magician’s assistant.

With the increased popularity of its hosts, and the fact that it was sold out way in advance, one would expect Hot Tub’s crowd to be primed for a party. But as solid as every set was, the crowd didn’t quite give back what was warranted for this one.

By contrast, the Alternative Show was rockin’. It’s a new home for the show, a much more suitable setting than the sterile l’Astral last year.

Maron easily received the biggest ovations of the night, both as he got on and got off the stage. It’s clear who most people showed up to see. Jeselnik boldly went for not one, but two hilarious 9/11 jokes in his set. Also being congratulated at the back of the room: Fortune Feimster (who had been spotted pre-show on the patio with Chelsea Handler), and Sean Cullen, who ended with a lengthy impression of a southern lawyer that nobody wanted to see end.

In fact, nobody wanted to see the show end period. Least of all Rory Scovel. (Light? What light?)