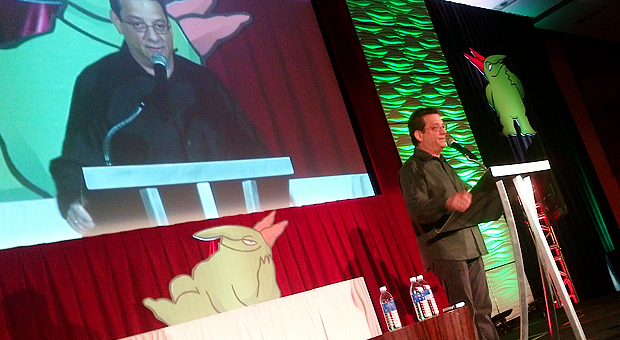 “I have prepared two letters. And several notes to myself.” – Andy Kindler

Might as well say it: this was probably Kindler’s strongest State of the Industry in the last five years.

It’s tough to give these speeches justice in print, because both Kindler’s style and the vibe of the room are such a specific combination. But it’s worth trying. Below is a selection of the (arguably) best moments from his annual skewering of the industry, which Kindler noted he’s been doing at Just For Laughs for two decades now.

Huge props to James Adomian for opening the show with his painfully accurate Kindler impression, providing the man himself with a hot crowd in the Hyatt ballroom.

“They bought out the bottom part of my progressive lenses. Every time I’d look down it would say ‘watch Whitney’.”

“Chelsea Handler has just signed a $60 million deal where she has just agreed to not come up with any horrible ideas.”

“I referenced Chelsea Handler in Melbourne and nobody knew who she was, and for one night I was on the top of the world.”

Rath – who always earns a mention or two from Kindler – left the speech mid-way through last year. This year, Kindler made him share with the rest of the class the little joke he came up with to explain his departure.

“They gave a special award to Robin Williams. What was it, the Lifetime Flop Sweat Award? The Lifetime Won’t Talk in his Own Voice Award?”

“They showed a taped package before he accepted his award. I felt like I was on an acid trip. There was literally nothing funny in it. You could go over it like a Zapruder film, frame by frame.”

“What is Aziz Ansari doing? Is he laying his hands on people at his shows that he’s selling out 95 months in advance?” “I watched his special Dangerously Delicious. Not one blowfish joke.”

“Leno did a cutting edge interview for I think Parade Magazine, it was like 20 Things You Didn’t Know About Jay Leno. One of them: he used to be a comedian. Did you know that?”

“Dane Cook many years from now is going to have an arthritic hip from overselling his jokes.”

“He has a great sitcom coming out. He works in a stereotype factory.”

“Every stunt is the same thing, it’s an old person doing something you think an old person wouldn’t do. ‘Here, have some heroin. Would you like some heroin?’. ‘Hello young man, would you unzip your pants so I could go down on you?’.”

“I used to pretend that I had a higher calling, but it’s all bitterness, rage, and misplaced anger.” The line got a single laugh: from none other than Marc Maron.

“Louis CK was THIS close to coming up with a unified field theory, but he only does something for one year.”

“There are more laughs in two minutes of Portlandia than there are in a half hour of Louie.”

“Y’know how he smashed a car? He’ll tell you about it. The helicopter thing? That was him.”

Going after comedy’s golden boy was a risky move, and the crowd wasn’t entirely receptive to his first few jabs at the quality of Louie and the implication that CK may have an expanding ego. But this bit took a brilliant turn when Kindler delivered a lengthy, sarcastic praising of CK in a robotic voice, which then evolved into an equally robotic impression of CK himself. The fact that Kindler could get this room on board with a relentless, minutes-long CK slam was an impressive feat, and it rightfully brought the house down.