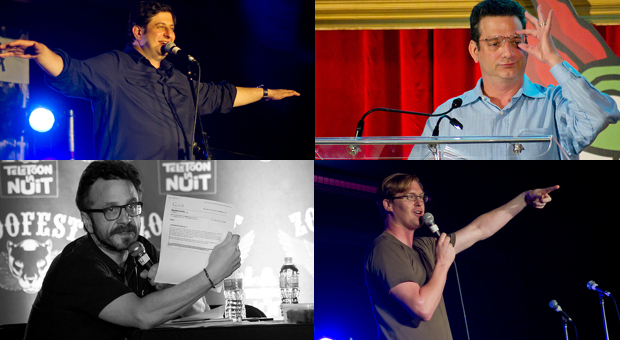 Just For Laughs has been celebrating its 30th anniversary all month, but only this week do the journos and industry types converge on downtown Montreal to take in the final weekend of shows, network at daytime events, and earnestly attempt to order grande soy Americanos in a Francophone accent. We. Are. Adorable.

Third Beat will be updated with comprehensive updates starting Thursday, but until then, here’s what’s newsworthy thusfar:

JFL Loves a Bunch of Authors

Seems April 2013 is a big month for book releases, and a few JFL performers have freshly-announced publication dates: Jen Kirkman’s I Can Barely Take Care of Myself: Tales From a Happy Life Without Kids

“Later I would realize that someone wasn’t powerful simply because they had the title of “exec” and a company had paid or him to travel. Actually, the fact that he could be shipped away from Los Angeles for a week meant he was less powerful.” –
Mindy Kaling, Is Everyone Hanging Out Without Me?

This won’t be the first JFL gala appearance for Pete Zedlacher, but this year’s invite came with a tantalizing possibility: meeting his comedic hero, Fozzie Bear, at JFL to host a gala with the rest of the Muppets. On a recent episode of Comedy Above the Pub, Zedlacher remembered how Fozzie was the first example of a comedian he’d ever seen.

“I was a little boy and I was watching the Muppet Show, and I asked my mom ‘what does that mean that’s he’s a comedian?’, and my mom said ‘he makes people laugh, that’s what he does,’ and I said ‘I want to be a comedian’. I was like four years old.”

The schedule has subsequently been announced, and Thursday night Zedlacher will come full circle as he performs on the same stage as his lifelong hero. Everybody say “aww”.

Also, the series Funny as Hell will be taping eight shows this week. Tickets are free, available from http://flavors.me/fahell3. The lineups aren’t being revealed for each episode yet, so you takes your chances, but based on the massive list on the website it would be impossible to end up with a weak show.

For the first time, some Comedy Conference events are competing with each other. The television execs will do their thing while a website workshop is happening two floors away. Kenny vs. Science is up against the Adam Carolla Podcast (his guests are Howie Mandel and “more to be announced”. One assumes they’ll force him to book at least one woman).

Sympathies go out to the new JFL performers who’ll need to leave their first State of the Industry Address halfway through to schmooze at the New Faces / Homegrown cocktail party.

Chum in the water

The New Faces shows were, once upon a time, a feeding frenzy for agents and managers clamoring to catch the first glimpse of a hot new talent. Youtube has killed that somewhat (okay, completely), but JFL is trying to inject some life back into the old tradition by holding a separate “NNew Faces of Comedy Unrepped” show on Thursday night. Take that as a hint, industry.