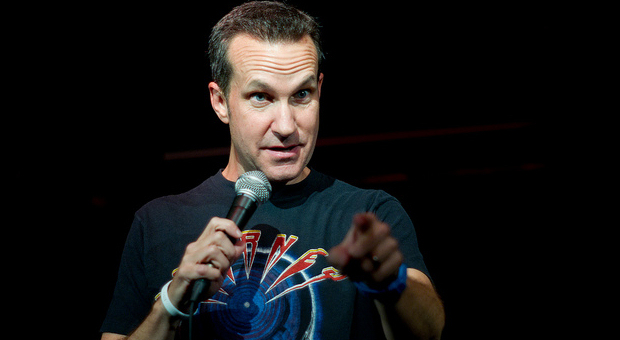 Jimmy Pardo doesn’t get to hit the road as much these days due to his Conan schedule (he’s the show’s warm-up guy and stars in occasional bits like this hilarious autograph convention remote), so it was lucky for Toronto that he found his way to town for a weekend at Comedy Bar.

Also lucky? That he even made it in time. Pardo’s flight was to land just a few hours before showtime, but a combination of weather problems en route from Los Angeles and a lengthy interrogation at Customs made his arrival a little too close for comfort. (Hasn’t Toronto comedy had enough travel-related mishaps this year?) Pardo is one of those comics where half the fun is seeing how much fun he’s having. Never Not Funny listeners are well aware of how quick he is, and putting an audience infront of him boosts that tenfold. He engages individual audience members, building little relationships with them and deferring to them throughout the show for answers and random ridiculous conversations. This is what crowd work is supposed to look like.

Pardo seems like he could happily improvise forever. But due to excessive politeness from the late show Friday crowd (how often do you hear that phrase, comics?), he managed to squeeze in some actual material about his son in a movie theatre, and an experience at a Subway restaurant with an act-out that resulted in a self-inflicted thumb wound. We hope he’s okay.

When you’re dealing with venue staff who like to improvise too, you’re destined for a golden moment.  After repeatedly calling out the noise bleed from the bar area, Pardo sarcastically asked if the music could possibly be turned up any louder.  It took tech Mark Andrada about 10 seconds to run outside and make that happen, much to Pardo’s genuine delight.

By all accounts, it was the Saturday early show that was the favorite, with Pardo and the energetic sold-out crowd whipping each other into a frenzy. A running gag about dehydration spilled into the second show, a taping of the Toronto-based podcast Comedy Above the Pub (CATP).

For almost two hours, Pardo talked with CATP host Todd Van Allen and co-host Ian Atlas about their adventures at that day’s Blue Jays game, how creepy it is that audience members know every trivial detail of Pardo’s life, whether he expects his son to go into show business, and what he really thinks of Jay Leno (caution: language warning).  Watch for that episode – or possibly two – coming soon on the CATP website and iTunes.

All photos are copyright Sharilyn Johnson / Third Beat Magazine, and may not be used without permission.