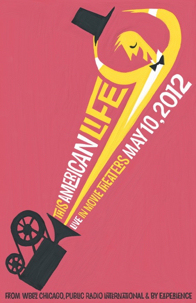 It’s a very specific audience that breaks into an ovation upon hearing the words “from WBEZ in Chicago…” emanate from a movie screen.

That’s what This American Life host Ira Glass was faced with when he recited the familiar line at the top of Thursday night’s live edition of the popular public radio show, held in New York and beamed via satellite to movie theatres across the U.S., Canada, and Australia.

In his true understated style, Glass stood on stage in charcoal suit, behind a simple music stand. He operated the cues for the opening story himself from an iPad – a task he later revealed was nerve-wracking due both to its complexities, and the fact that “my relationship with the Apple corporation isn’t the best” (a reference to This American Life’s recent Mike Daisey scandal).

The theme of the show, appropriately, was visuals.

Vancouver writer Ryan Knighton was the first storyteller of the night, sharing his efforts to explain his blindness to his young daughter. He delivered a hilarious account of walking alone with her in a wooded area frequented by bears, and being led to believe by her that they were face-to-face with one. He panicked, weighed his options, and then realized that her frantic cries of “bear!” were only in reaction to dropping her teddy bear on the sidewalk. (Knighton’s book on blind fatherhood is C’mon Papa: Dispatches from a Dad in the Dark

The much-hyped OK Go performance, with audience interaction via an iPhone/Andriod app, did not disappoint. The app randomly assigned a “color” to users, and color-coded Guitar Hero-type musical cues appeared on the movie screen. Viewers pressed their phone screens to play the assigned midi-style bips and bongs, playing along with the band as they played on handbells.

Back to the funny: Comedian Tig Notaro shared her hilarious account of running into singer Taylor Dayne in Los Angeles, interrupting her to say “sorry to bother you, but I just have to tell you, I love your voice.”

Dayne blew her off, and what followed was a year of repeated run-ins and repeated attempts to get a simple “thank you” from Dayne, using the exact same introductory sentence as the first time.

The bit was perfectly crafted and would have been a killer story as it stood. But as one of the promised surprises of the night, Taylor Dayne herself walked on stage, full of sequins and collagen, to serenade Notaro.

This was seemingly a surprise for Notaro, too. She kept a great straight/perturbed face at first, but it became harder for her to sustain that choice once Dayne invited her to sing and dance along.

Notaro was ultimately game, and busted out some Michael Jackson moves. But the bit went on longer than it needed to, and its entertainment value was primarily in how surreal it was.

The next surprise of the night: Fresh Air host Terry Gross would make a great comic actress. Or perhaps comedian Mike Birbiglia is just that good a director.

Either way, Birbiglia’s new short film about a radio interview that essentially never ends is a stroke of comedy brilliance, and must be seen to be appreciated:

A profile of unknown 1950s street photographer Vivian Maier followed, with a videotaped interview with the man who found her work in an abandoned storage locker. An obviously visual segment, this will not appear on a future broadcast, but her stunning photos are available in the book Vivian Maier: Street Photographer

Twice during the show, dancers from Monica Bill Barnes and Company performed eclectic pieces that broke up the evening nicely. The performances were fun, energetic and filled with humour, but both lacked clear storylines that might have made them more accessible to non dance fans.

The two funny monologist Davids – Rakoff and Sedaris – were saved for the final act, and there was no risk of stylistic similarities between the two.

David Rakoff’s monologue was the most emotional performance of the night. He approached the microphone with his left hand in his pocket, and revealed that he lost the use of it due to cancer. A dead limb, with no feeling. (He writes about his health issues in his book Half Empty

He spoke of the realities of the loss in frank terms, and illustrated the funny yet practical way he uses his belt loop to complete the now-arduous process of grating cheese.

It was an uncomfortable dinner party conversation about self-improvement that prompted him to reflect on the dance training of his younger days, from the easy workouts at the women’s college to the body-breaking drills on 55th St. that left him clutching the walls of New York City’s buildings “like someone who’d just been to the optometrist”.

He spoke of the “battered and empty suitcase” that is our body at the end of life’s journey, and how we all expect this to be a slow process. Some aren’t so lucky.

He stepped away from the mic, and he danced. Boy, did he dance. Slow, steady movement, with the emotion to match. He reached across his body a few times to ensure his left hand remained securely in his pocket, punctuating the melancholy of the action.

The audience was breathless. This was Rakoff at his best: funny, insightful, and bittersweet.

In an evening of odd surprises, David Sedaris provided the oddest.

The liberally-applied greasepaint hadn’t been set with powder, leaving the red nose and mouth glistening, the black parts uneven from the creases in his eyelids, and all the parts bleeding into each other.

It was a horror show, offset with a tepid story about the frustrations of standing in line to order coffee at a small town Courtyard Marriott. It’s a situation many in attendance are now likely to have nightmares about tonight. Sedaris’s get-up was never explained or acknowledged, and it will be fun to listen to this when it airs knowing how it looked live. That was, perhaps, the entire point.

Even after nearly three hours of stellar performances, there was a sense of giddiness in our theatre while watching Glass deliver the show’s always-predictable closing credits. Even the dry, long-ago-memorized plug for Reputation.com seemed oddly cool when delivered with the addition of visuals.

Glass even executed his weekly end-credit gag, taking a quote from that episode and attributing it to WBEZ general manager Torey Malatia. Notaro appeared from the wings to repeat her praise of Dayne’s voice, newly contextualized to apply to Glass.

Some of the live show will appear on a future episode of This American Life, but it’s unlikely the experience of seeing it as it happened can be replicated.