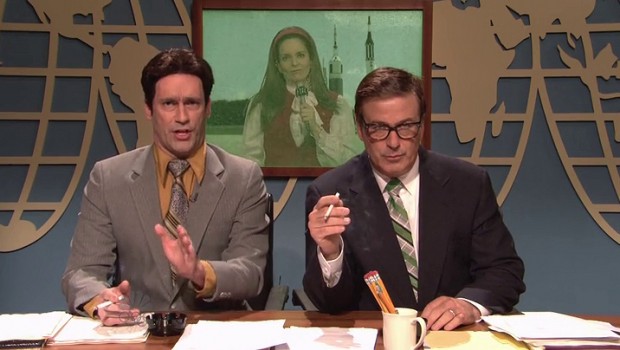 30 Rock aired their second-ever fully-live episode on Thursday night, with the help of a slew of guest stars including Jon Hamm, Donald Glover, Amy Poehler, and Jimmy Fallon.

The entire show was performed live twice, once for the eastern timezone and once for the west. The plot was the same on both coasts: the staff debated whether TGS would continue to air live or not, throwing to flashbacks to the historic live television moments that had come out of studio 6H.

But there were some changes between the two airings. Which one was better? This calls for an east coast / west coast battle!

Paul McCartney in the east, Kim Kardashian in the west.
Winner: East.

The Laugh-In parody The Gruber Brother and Nipsey featured multiple changes from coast to coast, most notaby who Alec Baldwin impersonates. He emerges through a hole in the wall as Richard Nixon in the east, and Charles Nelson Reilly in the west.
Winner: A tough one, but the Nixon was solid. East.

The unapologetically misogynistic NBC News co-anchor in the east coast version was played by Jon Hamm, making his second cameo of the episode. The west coast had real life NBC News anchor Brian Williams in the role, belittling a female reporter.
Winner: West, for the pearl-clutching shock of hearing Brian Williams say such things. 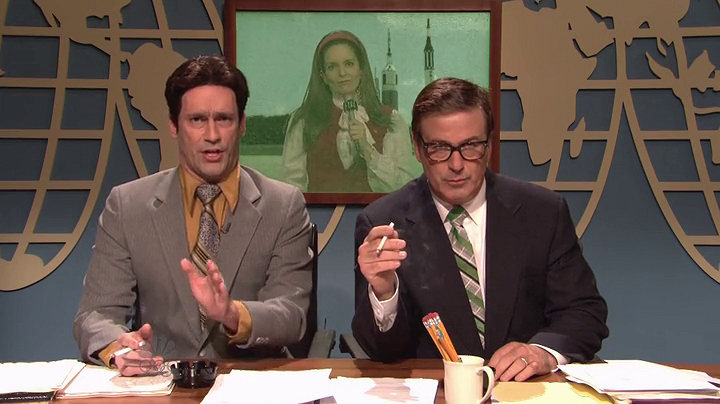 Chris Parnell “accidentally” refers to himself as a Nazi doctor in the east coast airing of a retro 1950s cigarette commercial. But the audience was cheering too hard to hear the bit, which made the callback to it later in the show pretty much DOA. Whether it was a fix made between shows, or a predetermined switch, the line “I’m known in the industry as the gay doctor because I always have a smile on my face” played much better.
Winner: West

In the east, Alec Baldwin and Scott Adsit locked lips – seemingly improvised – as the final scene faded out. During the west coast goodnights, Kristen Schaal and Jane Krakowski pretended to do the same, but accidentally did touch tongues.
Winner: All depends what you’re into.

the east coast show had the only obvious error of the night. Kristen Schaal played a back-up singer in the “Joey Montero Show” flashback, wearing a pink sequin dress. In the east, they seemingly forgot to get her back into her page uniform in time for her next scene as Hazel, and she roamed the hallways of 6H in her glittery garb.

So, the winner? Suppose that depends on whether you derive pleasure from seeing mistakes on live tv.

Well, it’s clear this east/west battle won’t be easily decided. Somebody hologram up some rappers and we’ll settle this the old fashioned way.

4 Responses to 30 Rock Live Episode: 5 Differences Between the East and West Versions