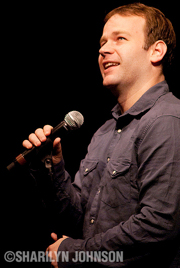 A few weeks ago, the folks at public radio’s This American Life announced that the upcoming live stage version of their program in New York would be beamed into movie theatres across the USA on May 10.

The night is a comedy nerd’s dream, with a lineup that includes David Rakoff, Tig Notaro, and Mike Birbiglia.

It appeared for many of us unfortunate Canucks that we’d have to cross borders to see this thing, but it turns out screenings are also happening right across this great land of ours (well, almost… sorry, Maritimes).

Click here to buy tickets for the Canadian screenings. (Note that you must select your city and hit the yellow “refresh” button beside it to view all the available showtimes, even for the default Toronto.)

Your trusty editor and a few dedicated Third Beat readers will be attending the screening up at the Cineplex Odeon Sheppard Centre Cinemas in Toronto, which is right at the Sheppard-Yonge subway stop.

Want to join us? Buy your own ticket through the website, and email sharilyn@third-beat.com for info on meeting time and place.