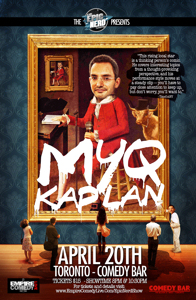 Readers in the Toronto area! Comedian Myq Kaplan is hitting up Comedy Bar this Friday night, and Third Beat has a few pairs of tickets to give away for the 10:30 show.

We’ll do the draw for pairs of tickets after 5pm Thursday, and notify winners via email soon after.

Not familiar with Kaplan? For shame! His recent album, Vegan Mind Meld, was a top 10 album on iTunes. He was a finalist on Last Comic Standing. He’s also made the talk show rounds, including this appearance on Letterman: